Sydney Drag Queens Are all Dressed up with Nowhere to Go. 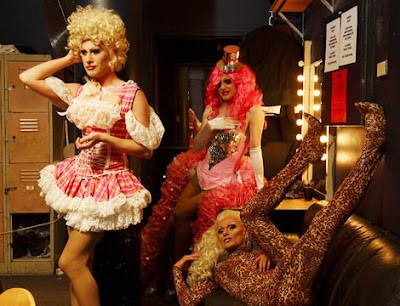 I came across this article (http://www.smh.com.au/news/national/drag-queens-all-dressed-up-with-nowhere-to-go/2007/11/23/1195753310044.html) while checking the Sydney Morning Herald to see the latest on the Australian elections. My blogger friend, Magic Bellybutton, is likely holding a vigil awaiting the results. I was struck by the fact that the chances of seeing such an article running in my local paper would be remote at best. There are certainly local drag queens in the Hampton Roads area, but one never sees the Virginian Pilot doing stories on them. No doubt Pat Robertson would blow a gasket. Here's some highlights on the situation in Sydney:

THE drag queens of Sydney are all dressed up with nowhere to go. "There are enough performers out there. There just aren't enough venues," said Mitzi Macintosh, a 13-year veteran of the drag scene. "And without a flower bed, nothing can bloom." The closure of two of Sydney's most famous drag venues has many performers facing the prospect of a trip to Centrelink.
Erskineville's Imperial Hotel is shut until next year for renovations and King Street's Newtown Hotel closed dramatically early this month after relations between the building owners and the licensee broke down over a lease agreement. Other stalwarts of the scene, such as Oxford Street's Midnight Shift and Stonewall and Arq in Flinders Street, are paring back their drag show offerings and relying increasingly on unpaid novices performing at open-mic nights.
Posted by Michael-in-Norfolk at Friday, November 23, 2007

Sydney is pretty much the most gay-friendly place in Australia. They have a gay and lesbian mardi gras every year. The parade used to be shown on national tv, but they stopped doing that a few years ago (no idea why, it was brilliant).