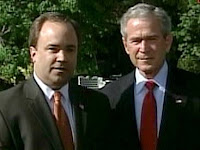 Hey, even I could have told Scott McClellan at the time that he was being hung out to dry when he continually put out denials for the White House in connecting with the outing of Valerie Plame. The Chimperator and Emperor Cheney used him as a sap and had no regard for destroying his credibility. Frankly, I am happy to see him calling them out on this. Perhaps it will help those still in denial to realize just how dishonest this regime has been. If their lips are moving, odds are that they are lying. Here are some highlights form MSNBC (http://www.msnbc.msn.com/id/21903753/):
WASHINGTON - Former White House press secretary Scott McClellan blames President Bush and Vice President Dick Cheney for efforts to mislead the public about the role of White House aides in leaking the identity of a CIA operative. In an excerpt from his forthcoming book, McClellan recount the 2003 news conference in which he told reporters that aides Karl Rove and I. Lewis "Scooter" Libby were "not involved" in the leak involving operative Valerie Plame.
"There was one problem. It was not true," McClellan writes, according to a brief excerpt released Monday. "I had unknowingly passed along false information. And five of the highest-ranking officials in the administration were involved in my doing so: Rove, Libby, the vice president, the president's chief of staff and the president himself."
McClellan's book, "What Happened," isn't due out until April, and the excerpt released Monday was merely a teaser. It doesn't get into detail about how Bush and Cheney were involved or reveal what happened behind the scenes.
Posted by Michael-in-Norfolk at Wednesday, November 21, 2007