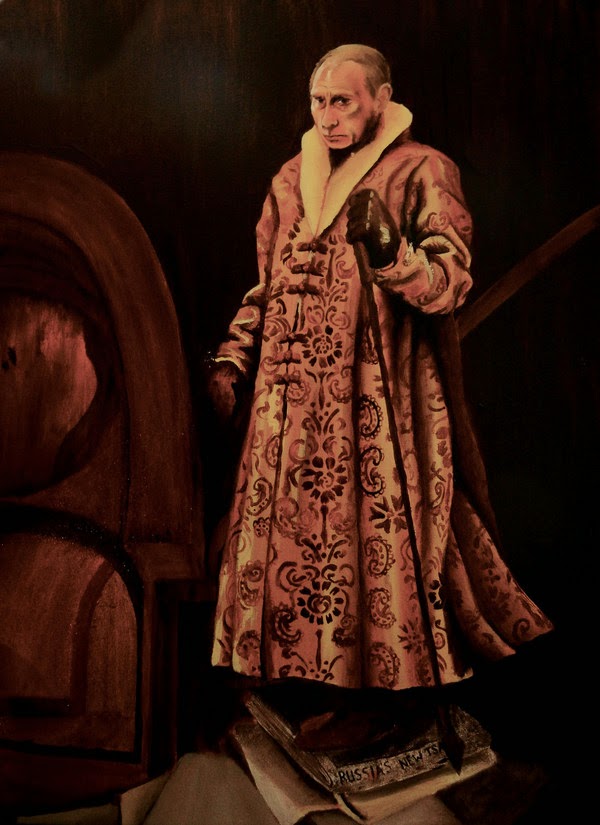 Like the nutcases at NOM, Vladimir Putin has a hard time grasping the reality that the world has changed and objective reality has changed from the preferred period in time in which he is psychologically locked.  With NOM, Brian Brown and others want to roll time back to the 1950's.  With Putin, he wants time reversed back to the days before the Soviet dictatorship and its "empire" held hostage by the Soviet army all collapsed.  One must never forget that Putin first rose to power through the KGB, not exactly an institution that cares about the rights of the asses.  Its ultimate sole goal was to keep the dictators in power and living well.  An article in CNN notes that this is perhaps why Putin still thinks he is living in 1985 or before.  Sadly, the Russian people have yet to realize that Putin is the true source of most of their nation's troubles.  Here are article highlights:

The first frosts of winter have already dusted the spectacular city of St. Petersburg with a powder of glistening ice. The air outside feels sharp and crisp. Russians hurry along the elegant boulevards, wrapped up tight against the biting cold. Russia's winter, its annual deep freeze, has begun.


But this year there's more than just a bitter chill in the air. For the past nine months relations with the West have become decidedly frosty too.

On the face of it the problem is Ukraine.  The West backed a popular uprising there in March, which toppled a Kremlin-friendly government.

Infuriated, Russia's president, Vladimir Putin, annexed the strategic Crimean Peninsula, where it has a key naval base.

One fascinating explanation for the failure of Western sanctions and rebukes to change this vast country's behavior may be in the mindset, the world view, of its strongman president.

I'm one of the few Western journalists to have sat down with Vladimir Putin. . . . I asked him back then if he could guarantee that Russian troops would not invade other former Soviet states, like Ukraine.

He reacted quite angrily, saying he objected to my question. It was Russians, he said, who should be given guarantees that no one attacks us.

The comment sheds light, I think, on how Vladimir Putin sees the world outside the walls of the Kremlin.

For him, Russia is under constant threat from the West. NATO expansion into former Eastern Bloc nations has eroded Russia's security. The prospect of Georgia joining the western military alliance, let alone Ukraine, is unthinkable for him.

The Cold War, from this perspective, has never really ended; we're still living in the 1980s.

The West, in particular the United States, still strives to "subjugate" Russia. President Putin repeated this just a few days ago in Moscow.

From a Western perspective, this seems like a cynical distortion of the facts, a Kremlin ploy to confuse and obfuscate.

But it may help explain why Russia is doing what it is doing, and why sanctions are not changing -- and may never change -- Kremlin policy.

It may also help to explain why, at a time of growing economic hardship, Russia's president remains so utterly popular at home.

His world view is theirs too. Like the harsh cold of the coming Russian winter, confrontation with the West is inevitable and must be endured.

Just as an insane Adolph Hitler led Germany to disaster by playing on German nationalism and sense of grievance, so too, Putin will be the downfall of Russia.  One hopes the Russian people come to recognize this sooner as opposed to later.
Posted by Michael-in-Norfolk at Saturday, November 22, 2014