Did The Catholic Church Have Complicity In the NOM/Regnerus Anti-Gay Parenting Study? 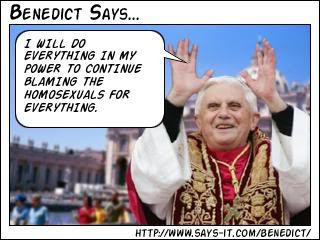 I have personally long had a gut level suspicion that the National Organization for Marriage is a front organization for the Roman Catholic Church as the Church hierarchy continues to wage a world wide anti-gay rights jihad.  Indeed, the only higher priority for the Church leadership other pushing the anti-gay jihad is the continued effort to protect child rapists and obstruct justice as new sexual abuse reports come to light virtually daily around the globe.  The link between the Church hierarchy would certainly explain the great lengths NOM has gone to in order to hide the sources of its funding.  An article in The New Civil Rights Movement provides a review of how the Church has been working hand in glove with NOM and may have been ultimately behind the funding for Mark Regnerus seriously flawed sociological study on gay parenting carried.  That the Church would engage in funding a deliberately biased and anti-gay study should not be surprising to anyone - these are the same men after all and the same institution that allowed hundreds of thousands of children and youths to be sexually assaulted literally on a global basis.  Here are some story highlights that comment on the unholy alliance between the Church leadership, NOM and other anti-gay organizations (it also describes why the Catholic Church needs to lose its tax-exempt status under the U.S. tax code):

Regnerus’s known total of $785,000 for the study was arranged by The Witherspoon Institute and The Bradley Foundation, where Robert P. George – (head of the anti-gay-rights, scientifically disreputable, so-called National Organization for Marriage) – holds positions of authority. Witherspoon president Luis Tellez is a NOM board member. NOM’s Robert George is a long-time Catholic Church co-conspirator in the Church’s ages-long, Unholy War Against Gays. He is a current Board member of The Catholic League, whose motormouth president Bill Donohue has a long and shameful history of verbal gay bashing.

The Regnerus study currently is being used as an anti-gay-rights political weapon in the 2012 elections. With its toxic connections to the so-called National Organization for Marriage, the Catholic Church of course has been using the invalid Regnerus study as a political weapon against LGBT-Americans — who against their wills are obliged to subsidize one of the very worst of their relentless and ruthless oppressors worldwide — the tax-exempt Catholic Church – with their hard-earned tax dollars.

NOM and the Catholic Church both are seemingly very worried about the P.R. fall-out from their dishonorable connections to the invalid and defamatory Regnerus study. It is hardly a surprise that NOM’s Maggie Gallagher, a pathological anti-gay liar and professional anti-gay hate speech propagandist responds to science-based debunkings of the Regnerus study with yet more of her filthy, gay-bashing lies.
It also is hardly surprising that the disreputable Catholic League President Bill Donohue is sweating the science-based criticism of the Regnerus study.

With the Catholic Church’s “infallible” leader Ratzinger implicated in the unconscionable actions of shifting child rapist priests between parishes without notifying parishioners of the danger, the Church appears to believe that by scapegoating gays, it will succeed in distracting world attention from its malfeasance.

A Change.org petition asks IRS Commissioner Douglas H. Shulman to investigate the Catholic Church for apparent violations of laws applicable to tax-exempt organizations such as the Catholic Church. The full text of the petition is extremely enlightening, and includes this: “The Church in every state very actively criticizes President Obama’s every LGBT initiative, naming him while condemning him, in ways that very evidently are negative endorsements of his candidacy, forbidden under 501(c)(3)-related law.” To sign the petition, go here.