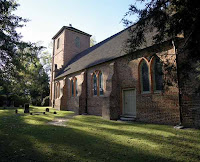 The boyfriend has a huge number of women friends through his popular and long established hair salon and last night one of his clients bought us tickets to attend a wine tasting and barbecue in Smithfield, Virginia, which is across the nearly 5 miles wide James River from Newport News/Hampton. Smithfield is typically best known for Smithfield Foods - the pork industry giant. It's actually a very old area with a great deal of history and the home of St. Luke's Church (pictured at left) which was founded in 1632 and is reportedly the oldest Gothic structure in the USA. In the early days of the area, the church with its massive brick walls doubled as a fortress when the area was under attack.
*
In any event, I wasn't sure quite what to anticipate since despite its historical interests and charms, Smithfield is relatively rural and not in the most progressive areas in Virginia. The wine tasting was at a shop called the Bon Vivant Market which has an amazing inventory of fine wines. The other attendees - including one of the local judges - were a lively and interesting group and truly could not have been nicer or more accepting of us as the lone gay couple. To my amazement, one of the younger women even said to us that she was thrilled about Maine's passage of gay marriage and that she couldn't wait until Virginia got in step with the future and recognize relationships such as ours.
*
Perhaps the wine tasting nature of the event winnowed out the Christian fundamentalist crowd from attending, but I was truly impressed with the sophistication and open mindedness of the people we met. After the tasting we went to the home of a friend of the boyfriend's client - Paula is her name - and a group of us continued to socialize. On the way home we put down the top on the car and enjoyed the gorgeous full moon sparkling on the waters of the James River as we headed back to Hampton. It was a fabulous evening and since the wine tastings are a regular event, we will definitely go back. I highly recommend them to any local readers. The evening definitely helped me forget at least temporarily the horrible post-divorce wars launched by my former wife.
Posted by Michael-in-Norfolk at Saturday, May 09, 2009