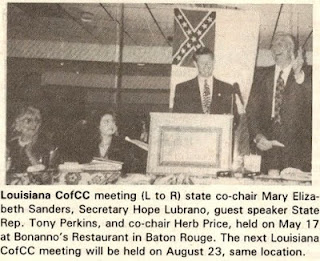 I have followed so-called "conservative Christian" organizations for close to two decades and long ago came to the conclusion that most were not only virulently anti-gay, but also had strong white supremacy tendencies. It's one reason that evangelicals and Christofascists rallied to Donald Trump's banner and remain loyal to him still. Simply put, Trump made being openly racist acceptable in Republican circles.  The icing on the cake for these "Christians" was Trump's war on LGBT rights and promises that they would be given special rights - licenses to discriminate, if you will. Trump may be out of office, but right wing Christian groups are rallying to the white supremacist cause by spending millions to back Republican efforts to disenfranchise minority voters. One such group is Family Research Council whose president, Tony Perkins (shown speaking to a white supremacy group), has long documented ties to white supremacist organizations. A piece in Salon looks at such groups which are most assuredly NOT acting as Christ would do.  Indeed, they are the antithesis to true Christian behavior.  Adding insult to injury, most of these groups are non-profits which means the rest of the taxpaying public is being forced to indirectly subsidize them. Here article are excerpts:

Republican state lawmakers who have rolled out more than 250 bills to restrict ballot access in more than 40 states, largely in response to President Donald Trump's false claims about election fraud, are receiving financial backing from an unusual coalition of Christian and "small government" groups.

The Family Research Council, the Susan B. Anthony List and the American Principles Project — all faith-based nonprofits — are spending millions to boost a Republican-led effort to restrict voting in dozens of states after the party lost the White House and the Senate amid record turnout and mail-in voting. Meanwhile, libertarian-leaning groups like FreedomWorks, Heritage Action — the political arm of the Heritage Foundation — and Tea Party Patriots are also planning an eight-figure investment to back the effort, which has already seen 253 restrictive bills introduced in 43 states, according to a a Brennan Center for Justice analysis. Heritage Action also plans to team with allies like the American Legislative Exchange Council (ALEC) to craft model legislation for state lawmakers to adopt.

"The bills being introduced are similar, and with good reason," said Rep. Colin Allred, D-Texas, a civil rights attorney who has worked on voting rights cases across the country. "The RNC and national Republican groups have drafted 'best practices' for voter suppression that state legislatures can use."

Trump stoked unfounded fears about mail-in voting, without any evidence, for months before the election as he floundered in the polls. He continued to claim that the election was somehow rigged or stolen after his loss but failed to provide any evidence, losing every legal battle in the process. Trump's claims raised tens of millions from his supporters, though he spent just a small fraction of that on actual legal costs while dropping far more on fundraising ads and pocketing the rest for his super PAC. Now his conservative allies are targeting donors who bought into his false election claims, justifying their push by citing voter concerns about "election integrity."

Frank Cannon, senior strategist for the Susan B. Anthony List and American Principles Project, told The New York Times that conservative activists quickly realized that the only way they could keep donations rolling in is by making the effort to restrict voting access the "center of gravity in the party."

"We've got 106 election-related bills that are in 28 states right now," FRC president Tony Perkins said at a recent "Pray Vote Stand Townhall" alongside Michael Farris, the president of the Christian legal group Alliance Defending Freedom, according to the Times.

Perkins made clear at the town hall that his real interest was in making sure Democrats do not win elections, noting that his home state of Louisiana has consistently voted for Republicans after the state legislature created stricter voting laws after Democrats won a Senate seat in 1996.

Republican statements about gaining a partisan advantage and using the issue to raise money undermine their claims that this new wave of restrictions are in response to voter concerns about "election integrity." But even that argument ignores the concerns of the much larger majority of voters who are not part of the GOP base, civil rights groups say.

"These efforts seek only to put up barriers to silence our voices, based on who we are, where we live or how we vote," Hannah Fried, the national director of All Voting is Local, a civil rights campaign targeting voter restrictions, said in a statement to Salon, noting that 65 million voters cast their ballots by mail in the last election. "This is not what voters want, or what voters deserve. Most of us simply want everyone to have the freedom to vote — where we all can have a say in and trust the integrity of our elections. The majority of Americans support efforts to give voters more options for voting safely — not less."

I've updated my blogroll and made sure to include you.

Thanks Shane!! I subscribed to Gazette updates. :)

I truly appreciate the support.

I'll include you in my news round-ups whenever I can.