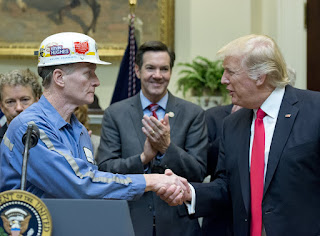 Other than his use of executive orders to reverse Obama era regulations that will make the nation a more polluted, less safe and more discriminatory place for Americans and their children, Donald Trump has accomplished little during his almost 100 days in office.   Of, yes, he claims that he has done much, but would one seriously expect anything less from a man who suffers from narcissistic personality disorder?  Objective facts mean nothing to the man.  And in terms of the economic miracle that he promised to angry white voters in the rust belt and the backwaters of the Bible Belt, little or nothing has happened and likely never will.  At least for the non-wealthy.  As a column in the New York Times lays out, Trump's economic plans will bear a striking resemblance to that of Republican presidents from Reagan on forward: tax cuts for the wealthy and trickle down economics - voodoo economics, if you will, that have not worked once during the last 37 years.  Here are column highlights:

It’s important to note just how little the tweeter-in-chief has managed to achieve; but we also need to focus on what, exactly, it is that he hasn’t achieved.

For Mr. Trump sold himself to voters as unorthodox as well as effective. He was going to be a different kind of president, a consummate deal-maker who would transcend the usual ideological divide. His supporters should therefore be dismayed, not just by his failure to actually close any deals, but by the fact that he evidently has no new ideas to offer, just the same old snake oil the right has been peddling for decades.

We saw that on Trumpcare, where the administration outsourced its policy to Paul Ryan, who produced exactly the kind of plan you might have expected: take insurance away from millions, make it worse for the rest, and use the money to cut taxes on the wealthy. Populism!

And now we’re seeing it on taxes. Mr. Trump has promised to unveil a “massive” tax cut plan next week. This announcement apparently came as a surprise to his own Treasury officials, who obviously don’t have a plan ready. Still, one thing is clear: Whatever the details, Trumptax will be a big exercise in fantasy economics.

Last week Stephen Mnuchin, the Treasury secretary, told a financial industry audience that “the plan will pay for itself with growth.” And we all know what that means.

Back in 1980 George H. W. Bush famously described supply-side economics — the claim that cutting taxes on rich people will conjure up an economic miracle, so much so that revenues will actually rise — as “voodoo economic policy.” Yet it soon became the official doctrine of the Republican Party, and still is. That shows an impressive level of commitment. But what makes this commitment even more impressive is that it’s a doctrine that has been tested again and again — and has failed every time.

Bill Clinton provided a clear test, by raising taxes on the rich. Republicans predicted disaster, but instead the economy boomed, creating more jobs than under Reagan.

Then George W. Bush cut taxes again, with the usual suspects predicting a “Bush boom”; what we actually got was lackluster growth followed by a severe financial crisis. Barack Obama reversed many of the Bush tax cuts and added new taxes to pay for Obamacare — and oversaw a far better jobs record, at least in the private sector, than his predecessor.

[A]nd let’s not forget recent experiences at the state level. Sam Brownback, governor of Kansas, slashed taxes in what he called a “real live experiment” in conservative fiscal policy. But the growth he promised never came, while a fiscal crisis did. At the same time, Jerry Brown’s California raised taxes, leading to proclamations from the right that the state was committing “economic suicide”; in fact, the state has experienced impressive employment and economic growth.

Donald Trump was supposed to be different. Guess what: he isn’t. . . . . We might also note that a man who insists that he won the popular vote he lost, who insists that crime is at a record high when it’s at a record low, doesn’t need a fancy doctrine to claim that his budget adds up when it doesn’t.

Still, the fact is that the Trump agenda so far is absolutely indistinguishable from what one might have expected from, say, Ted Cruz. It’s just voodoo with extra bad math. Was that what his supporters expected?

The self-satisfaction derived from being emboldened to discriminate others and indulge in open racism will not pay the bills or put money in the bank.  Once again, Trump and the GOP have pandered to baser instincts to get  people to vote against their own economic interests.  Those who fall for this time and time again deserve the economic calamity that will and has over take them.
Posted by Michael-in-Norfolk at Monday, April 24, 2017