Today's GOP: A Party Defined by Its Lies 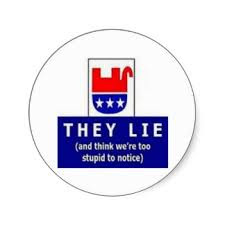 A column in the New York Times basically makes a point that I have pretty much come to believe: good people can’t be good Republicans.  And I say this as a former Republican who comes from a family with generations of Republicans.  Now, none are Republicans.  And, if they were still living, I suspect my parents and grand parents would not be Republicans any longer.  All of them had a strong sense of right versus wrong and believed that basic honesty and morality mattered. Thus, by definition, they could not be Republicans nowadays.  But back to the column which lays out the truth that the entire GOP agenda is based on lies and deception.  Here are column excerpts:

During my first year as an Op-Ed columnist for The New York Times, I wasn’t allowed to use the word “lie.”

That first year coincided with the 2000 election, and George W. Bush was, in fact, being systematically dishonest about his economic proposals — saying false things about who would benefit from his tax cut and the implications of Social Security privatization. But the notion that a major party’s presidential candidate would go beyond spin to outright lies still seemed outrageous, and saying it was considered beyond the pale.

Obviously that prohibition no longer holds on this opinion page, and major media organizations have become increasingly willing to point out raw falsehoods. But they’ve been chasing a moving target, because the lies just keep getting bigger and more pervasive. In fact, at this point the G.O.P.’s campaign message consists of nothing but lies; it’s hard to think of a single true thing Republicans are running on.

And yes, it’s a Republican problem (and it’s not just Donald Trump). Democrats aren’t saints, but they campaign mostly on real issues, and generally do, in fact, stand for more or less what they claim to stand for. Republicans don’t. And the total dishonesty of Republican electioneering should itself be a decisive political issue, because at this point it defines the  party’s character.

[T]here are two big themes. They lie about their agenda, pretending that their policies would help the middle and working classes when they would, in fact, do the opposite. And they lie about the problems America faces, hyping an imaginary threat from scary dark-skinned people and, increasingly, attributing that threat to Jewish conspirators.

Both classes of lie are rooted in the real G.O.P. agenda. What Republicans truly stand for, and have for decades, is cutting taxes on the rich and slashing social programs.

The G.O.P.’s problem is that this agenda is deeply unpopular. Large majorities of Americans oppose cuts in major social programs, while most voters want to raise, not reduce, taxes on corporations and high-income individuals.

But instead of changing their agenda to meet voters’ concerns, Republicans have resorted to a strategy of deception and distraction. On one side, they have gone full black-is-white, up-is-down on policy substance. Most spectacularly, they are posing as defenders of protection for people with pre-existing conditions — protection that their failed health bill would have stripped away, and which they are now trying to take away through the courts. And they’re claiming that Democrats are the ones threatening Medicare.

On the other side, they’re resorting to their old standby: race-based fear.

The lies have come nonstop since Trump’s inauguration address, which conveyed a false vision of “American carnage.” But they have gotten ever more extreme, culminating in the portrayal of a small caravan of refugees still 1,000 miles from the border as an imminent, menacing invasion — somehow full of diseased Middle Eastern terrorists.

The crucial thing to realize is that these aren’t just ugly, destructive lies. Beyond that, they shape the G.O.P.’s nature. It is now impossible to have intellectual integrity and a conscience while remaining a Republican in good standing. Some conservatives have these qualities; almost all of them have left the party, or are on the edge of excommunication.

Those who remain are either fanatics willing to do anything in pursuit of power, or cynics willing to go along with anything for a share of the spoils. And it’s foolish to imagine that there are any limits on how far a party of fanatics and cynics will be willing to go. Anyone who might have had a sticking point, some uncrossable red line of bad behavior, has already taken the off ramp.

That’s why a Republican campaign built entirely on lies should itself be a political issue — a reason to vote Democratic even if you want tax cuts. For we’re not just talking about a party selling bad ideas on false pretenses. The addiction to lies has also — let’s be blunt — turned it into a party of bad people. . . . If they pull this midterm election out, expect the worst.

Posted by Michael-in-Norfolk at Thursday, November 01, 2018