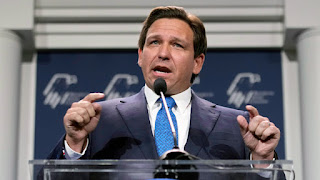 The base of today's Republican Party has become so debased and putrid that to win Republican primary contests candidates must do everything short of publicly donning KKK robes and physically abusing African American citizens and anyone else the Christofascist/white supremacist party base deems to be "other", including LGBT youth.  In his quest for the 2024 GOP presidential nomination, the Ivy League educated Ron DeSantis is proving that there really is no level of bigotry and prejudice he won't pander to if it thrills the most depraved and hate-filled elements of the party base. DeSantis' latest move has been rejected an Advanced Placement course covering African American Studies — saying the class indoctrinates students to "a political agenda.  As a piece at NPR lays out, the course does no such thing and DeSantis' only true motivation is to please the haters in the party base who cannot tolerate any accurate teaching of America's - and Florida's - racist past and who want put minoroities "in their place".   A column in the Washington Post looks at DeSantis' action and what it sadly says about him (and by extension a majority of Florida voters who voted to reelect him).  Here are column excerpts:

Florida’s Republican governor and presidential aspirant Ron DeSantis has made a name for himself by harassing Black voters, setting up a system to sue teachers for teaching race in ways that might offend Whites, singling out LGBTQ youth (while gagging teachers) and engaging in extreme gerrymandering to reduce the voting power of minorities.

In what is surely among its most explicitly racist actions, the DeSantis administration determined (on what basis?) that the course is “inexplicably contrary to Florida law and significantly lacks educational value,” according to a Jan. 12 letter from the Florida Education Department to the College Board.

White House press secretary Karine Jean-Pierre blasted the move (while clarifying that the White House does not dictate curriculum). Jean-Pierre declared that it is “not new from what we’re seeing, especially from Florida, sadly.” She pointed out that state officials “didn’t block AP European History. … They didn’t block our art history. But the state chooses to block a course that is meant for high-achieving high school students to learn about their history of arts and culture.”

I hate to point out — for fear of putting a target on its back — that the University of Florida has an esteemed African American Studies program (as does virtually every other well-regarded university). . . . The university goes on to provide the essential historical context for the program: “Before 1958, a state law in Florida banned black attendance at public universities in undergraduate, graduate and professional programs. Between 1945 and 1958, 85 black students applied for admission to all levels of UF, and all were rejected.” The University of Florida, like many institutions in the South, was the site of “massive resistance” after Brown v. Board of Education mandated desegregation:

In 1949 Virgil Hawkins was public relations director of Bethune-Cookman College at Daytona Beach when he applied to the University of Florida’s law school. Five other blacks applied with Hawkins to UF graduate and law programs, but all were refused admission. They sued in the Florida Supreme Court for an order requiring UF to admit them. The state of Florida offered to send them out of state. Also, the Board of Control voted to establish a segregated law school at [Florida A&M University]. …

The U.S. Supreme Court ordered Florida to immediately enroll [Hawkins] in 1957, but the Florida Supreme Court concluded that federal law could be superseded by state law in some instances (the now-discredited “interposition” doctrine).

That sad chapter in Florida history gets at the heart of the problem. This is fact-based history, and Florida did not explain how the AP course supposedly contravened state law. If it is referencing last year’s Stop WOKE Act, which blocks the teaching of material that could make students feel guilt or responsibility for historical racism, then one has to wonder whether something as simple and straightforward as the state’s own history of segregated education can be studied.

The DeSantis administration’s actions put to lie the notion that the attack on “critical race theory” is aimed at “socialist ideas” or educationally suspect pedagogy. This is about rewriting history to wipe out a critical part of our American experience, to deny the wrongs done to millions of Americans and to exempt institutions from the obligation to take a hard look at remedying past injustice.

It will be interesting to see if former senator Ben Sasse (R-Neb.), the new president of the University of Florida, has anything to say about this decision. It provides an early test as to whether he is a serious educator or a political hack.

In any event, DeSantis can expect more litigation over this latest move to appease the right-wing base. Janai S. Nelson, president and director-counsel of the NAACP Legal Defense Fund, told me, “If the new Advanced Placement Course on African American Studies violates Florida laws, as alleged by the Florida Department of Education, it only proves the unconstitutionality of the state’s laws.”

Historically, a key aspect of white supremacy has been the denial of Blacks’ own suffering, their historical experience and their current scholarship. It’s the ultimate expression of contempt for certain Americans as unworthy and peripheral to the story of “real” — read “White” — America. The goal here is unmistakable: eradication of African American historical experience.

DeSantis and those playing to White grievance may prefer that students never learn about such figures and incidents. But considering the damage already done in under-educating Americans, perhaps African American studies (and a complete study of the diverse American experience) should be included in every K-12 curriculum for every student.

Ron DeSantis should remind us that if we want a fully aware, educated population capable of functioning as competent citizens in a diverse democracy, the rest of us need to push back against nefarious attempts to erase history.

DeSantis is despicable.  As for Floridians who support him, I can only conclude they are morally bankrupt and I will now think twice before vacationing in Florida again.

Posted by Michael-in-Norfolk at Tuesday, January 24, 2023