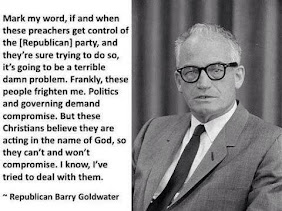 Years ago the late Barry Goldwater - who many thought to be far right at the time - warned of the meance the country would face if far right "Christians" ever captured control of the Republican Party.  That warning has seemingly come true in Texas where the Texas Republican Party convention adopted positions that reject democracy and legitimate elections and would put in place Christian Taliban religious beliefs by enshrining them into law.    The convention also showed the ridiculousness of Log Cabin Republicans ever believing they could be accepted in today's Republican Party by (i) banning them from having a booth at the convention and (ii) passing a statement that homosexuality is “an abnormal lifestyle choice.” I have long believed that being gay and supporting today's GOP is like a 1930's German Jew joining the Nazi party.  On virtually every issue ranging from gun control to public education to repealing the 1965 Voting Rights Act the convention adopted positions that ought to terrify sane and rational people.   One can only hope Texans are paying attention to the reality that the Republican Party now is a clear and present danger to democracy in both Texas and the nation at large.  A column at CNN looks at the insanity and extremism that defines today's GOP.  Here are highlights:

Disturbing video from the Texas Republican Convention this weekend shows convention-goers mocking GOP Rep. Dan Crenshaw – a Navy SEAL veteran who lost his right eye to a bomb in Afghanistan – with the term “eye patch McCain.”

But apparently even more heinous in the eyes of some attendees is that Crenshaw rejected former President Donald Trump’s claims that the 2020 election was stolen. One man wearing a red “Make America Great Again” hat can be seen yelling in an online video, “Dan Crenshaw is a traitor!” and “He needs to be hung for treason!”

As despicable as the behavior toward Crenshaw was, even more alarming were the actions taken by the Texas GOP and the convention’s 5,000-plus delegates.

The gathering rejected the outcome of a democratic election, supported bigotry toward the LGBTQ community and imposed far-right religious beliefs on others by seeking to have them enshrined into law. And that wasn’t half of it.

Texas Republicans are no longer hiding their extremism. Instead, they are openly embracing it. Even before the opening gavel, they gave us a glimpse of the party’s extremism in the Lone Star State by banning the Log Cabin Republicans from setting up a booth at the convention.

Texas Republican Party Chairman Matt Rinaldi cast the deciding vote on the move to bar the group that has advocated for LGBTQ Republicans for decades. “I think it’s inappropriate given the state of our nation right now for us to play sexual identity politics,” Rinaldi told the Fort Worth Star-Telegram.

Once it formally got underway, the convention took a number of appalling and un-American actions. First, delegates approved a measure declaring that President Joe Biden “was not legitimately elected.”

Republican delegates also booed John Cornyn, the senior US senator from Texas, at the convention Friday because of the Republican lawmaker’s role leading negotiations to reach a Senate deal on a bill to stem gun violence. . . . . The platform, set to be approved, called for repealing or nullifying gun laws already in place, such as the Gun Control Act of 1968, which prevents felons and other dangerous people from being able to purchase a gun legally. Apparently, the Texas GOP believes that even dangerous people should have a constitutionally protected right to buy a gun.

The Texas GOP platform also embraced ramping up anti-abortion rhetoric in public schools. For example, the platform states that “Texas students should learn about the Humanity of the Preborn Child, including … that life begins at fertilization.” It even seeks to force students to watch “a live ultrasound” and for high-schoolers to read an anti-abortion booklet that critics say “includes scientifically unsupported claims . . . .

The Texas GOP platform also does its best to demonize those in the transgender community. It describes transgender people as suffering from “a genuine and extremely rare mental health condition.” And it sees sexual reassignment surgery as a form of medical malpractice.

The platform takes aim at gay Americans as well with the statement that homosexuality is “an abnormal lifestyle choice.” Instructively, the Texas GOP platform did not include such language in 2018 and 2020.

This platform gives us a glimpse into the views of the Republican base on key issues that in turn will pressure GOP elected officials in Texas – and possibly beyond the state – to adopt similarly extreme positions or run the risk of a primary challenge from an even more extreme Republican.

What caused this move to the far right? Brandon Rottinghaus, a political scientist at the University of Houston, told The Texas Tribune about the state GOP’s new extreme platform, “Donald Trump radicalized the party and accelerated the demands from the base.” He added alarmingly, “There simply aren’t limits now on what the base might ask for.”

I don’t think Trump radicalized the base – rather he simply gave people permission to be who they always wanted to be.

But I agree with Rottinghaus that there are now no limits for what the GOP base might seek – be it rejecting election results it doesn’t agree with to enacting more laws based on extreme religious beliefs. And that should deeply alarm every American who wants to live in a democratic republic.