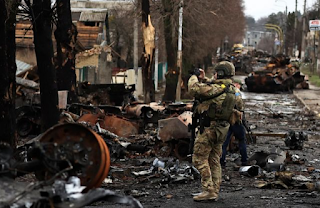 With Russian forces withdrawing in some areas of Ukraine, horrors are being revealed including murdered civilians and entire towns leveled. Add to that the deliberate shelling of hospitals, schools, and residential buildings and it's clear that Putin's scorched earth approach has crossed the line into war crimes,  For this a former United Nations prosecutor is urging that an international arrest warrant be issued for Putin.  As the BBC reports, the deliberate murder of civilians occurred in the town of Bucha:

At least 20 dead men were lying in the street as Ukrainian troops entered the town. Some of them had their hands tied behind their backs. The mayor said they had buried 280 people in mass graves.

While such a warrant would be ineffective within Russia so long as Putin remains dictator, this would (i) bar him from leaving Russia and (ii) set the stage for eventual prosecution in the manner of Slobodan Milosevic, the one time president of Serbia, who likewise had ordered war crimes to be committed.  A piece in Politico looks at the issue:

GENEVA — The former chief prosecutor of United Nations war crimes tribunals for the former Yugoslavia and Rwanda has called for an international arrest warrant to be issued for Russian President Vladimir Putin.

the Swiss lawyer who oversaw U.N. investigations in Rwanda and the former Yugoslavia said there were clear war crimes being committed in Ukraine.

She said she was particularly shocked by the use of mass graves in Russia’s war on Ukraine, which recalls the worst of the wars in the former Yugoslavia.

“I hoped never to see mass graves again,” she told the newspaper Blick. “These dead people have loved ones who don’t even know what’s become of them. That is unacceptable.”

Other war crimes she identified in Ukraine included attacks on civilians, the destruction of civilian buildings and even the demolishing of entire villages.

She said the investigation in Ukraine would be easier than that in Yugoslavia because the country itself had requested an international probe. The current ICC chief prosecutor, Karim Khan, visited Ukraine last month.

If the ICC finds proof of war crimes, she said, “you must go up the chain of command until you reach those who took the decisions.”

She said it would be possible to bring even Putin to account.

“You mustn’t let go, continue to investigation. When the investigation into Slobodan Milosevic began, he was still president of Serbia. Who would have thought then that he would one day be judged? Nobody,” she told Blick.