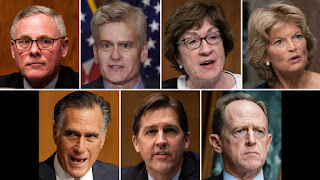 Fifty seven senators including seven Republicans - Richard Burr of North Carolina, Bill Cassidy of Louisiana, Susan Collins of Maine, Mitt Romney of Utah, Lisa Murkowski of Alaska, Pat Toomey of Pennsylvania, And Ben Sasse of Nebraska who are pictured above - voted to convict Donald Trump for inciting an insurrection.  The other forty three Republicans  chose to pander to the basket of deplorables that comprises the GOP base and even ignored the fact that Trump had endangered their own lies.  The cowardice and moral bankruptcy of these forty three spineless individuals will haunt them in the long view of history and confirms that they have no basis to ever lecture anyone on morality or decency. I have little use for Susan Collins of Maine, but at least she chose not to prostitute herself to Trump one last time. Don't be fooled by those who will bloviate about Trump being out of office so a guilty vote wasn't required.  They sent a clear message that attempting overthrow the U.S. government is perfectly fine in their foul and craven view.  A column in the Washington Post excoriates these senators who gave treason a pass.  Here are highlights:

This is damning — and utterly believable — evidence of Trump’s culpability not just in inciting the attack but in failing to try to stop it after it had begun. This goes straight to the biggest weakness in Trump’s generally pathetic defense. His attorneys at least had some things to say in defense of Trump’s actions before the riot. Their arguments may have been unconvincing and deceptive, but at least they had arguments: They said that Trump didn’t intend his supporters to violently attack the Capitol when he told them to “fight much harder” — he only wanted them to fight within legal and political channels.

But the Trump attorneys literally had nothing to say about Trump’s actions after the attack began. In his closing argument, lead impeachment manager Jamie B. Raskin (D-Md.) asked defense attorneys: Why didn’t Trump tell his supporters to stop the attack as soon as he learned of it? Why did he do nothing for at least two hours? And why did Trump fail to condemn the rioters? The defense attorneys had no response.

It’s obvious why Trump’s lawyers couldn’t defend his conduct after the attack began. It was indefensible and inexcusable. [Trump] The president was clearly rooting for the mob, at least initially. The conversation between McCarthy and Trump confirms that. So, too, does the fact that even after then-Vice President Mike Pence had to be evacuated from the Senate chamber at 2:13 p.m., Trump still inflamed the mob, which was now inside the Capitol, with a tweet critical of his vice president.

Trump’s attorney Michael van der Veen said on Friday, “At no point was the president informed the vice president was in any danger.” That is clearly false. Sen. Tommy Tuberville (R-Ala.) reports that Trump called him around 2:26 p.m. to urge him to delay the electoral vote certification. Tuberville says he told [Trump] the president that Pence had been hustled out and that the whole Senate was evacuating. Yet Trump still did next to nothing to attempt to rein in the rioters. Even after all the horrors of the day, Trump still said that he “loved” the mob and that they were “very special.”

Sen. Lindsey O. Graham (R-S.C.), the arch Trump lickspittle, sought to cast doubt on the new evidence by tweeting: "The source of these stories is the liberal media with an agenda.” Nope. The source of these stories is Graham’s fellow Republicans. Imagine how damaging it would have been to Trump’s defense if Herrera Beutler and Tuberville had testified under oath for the whole world to see  . . . .

Trump’s attorneys were so eager on Saturday to avoid witnesses that they agreed to stipulate that Herrera Beutler’s testimony was accurately reported by CNN (while falsely claiming that McCarthy had denied her account). The surprise is that Democrats took the Trump team up on its offer even after the Senate had voted to hear witnesses. It would not have been difficult to depose Herrera Beutler and other witnesses while the Senate continued with other business.

No amount of testimony, admittedly, would change most Republican votes, because most GOP senators are too terrified of Trump to convict him. Only seven dared to vote for conviction — and that’s more than expected. . . . When American democracy has faced an unprecedented assault from an American president, it behooves the Senate to at least pretend to care.

[E]ven without hearing from witnesses, the House impeachment managers still presented conclusive evidence of Trump’s guilt. Eighty-six percent of the Senate Republicans just didn’t care. The smoking gun was right in front of them, and they said, “What gun? What smoke?”

One can only hope that prosecutors in New York State and New York City and perhaps Georgia have the moral courage to pursue Trump and put him behind bars.  Trump is human refuse.
Posted by Michael-in-Norfolk at Saturday, February 13, 2021