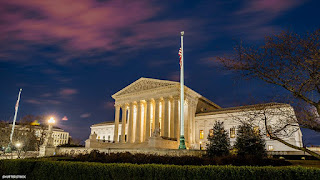 With the recently appointed and thoroughly unqualified religious extremist Amy Coney Barrett on the U.S. Supreme Court, Christofascists are almost giddy with glee at what the hope will be the Court's ruling in  Fulton v. City of Philadelphia that grants them and their institutions and "ministries" to discriminate at will against gays and those of other religions while in some cases gorging themselves at the trough of taxpayer money.  The instant case involves a Catholic foster care agency that wanted to receive public funds yet be allowed to discriminate against same sex couples.  The City of Philadelphia rightly said no and removed the Catholic agency from the publicly funded list.  Like far to many churches and religious institutions, without taxpayer funding  - or, in the cases of churches, tax-exempt status - the agency would not remain solvent given the lack of support within the denomination.  The Christofascist hope is that the Court will grant them a largely unfettered right to ignore non-discrimination laws and ordinances that bind the rest of the citizenry. The irony, of course, is that religious belief is 100% voluntary and readily changeable while sexual orientation and other characteristics disliked by Christofascists (e.g., skin color and national origin) are not. A piece in the Washington Post looks at the case and Christofascist hopes.  Here are excerpts:

When the Supreme Court on Wednesday hears Fulton v. City of Philadelphia, much attention will be on the new justice — it’s Amy Coney Barrett’s third day hearing oral arguments — and on a hot-button case about whether the city may cancel the contract of a Catholic foster care agency because it won’t work with same-gender couples. But a potentially broader issue will arise during the hearing that could potentially reshape the status of religion in U.S. law — further strengthening religious freedom rights in ways that some say has already gone too far.

In Fulton, the court will consider whether the city violated the First Amendment by disallowing Catholic Social Services from being part of its foster care system.

The justices are also being asked to overturn a ruling that has been controversial for religious conservatives since it was made 30 years ago: Employment Division v. Smith. The decision, which says a person’s religious motivations don’t exempt them from neutral, generally applicable laws, was written by Justice Antonin Scalia and said that without limits “every citizen [would] become a law unto himself.”

The Trump administration is supporting Catholic Social Services. It says the court does not need to overturn Smith to rule for the agency and alleges there’s evidence of religious bias in the way the city went about enforcing the law.

The court this week said it would entertain taking up Smith, but it is not obliged to make any ruling or detailed comment about it. However, multiple justices have made comments reflecting their willingness to reconsider that ruling, and lawyers are prepared to present arguments about Smith broadly — and how it pertains to Fulton.

The possibility that the newly 6-3 conservative-majority court could overturn Smith and set a new precedent about the legal status of religion comes as the country is deeply unsettled about how to balance LGBTQ and other rights with the rights of religious traditionalists. There are increasingly diverse views about what constitutes religiosity in general and how it should be weighed against other rights and when and how much religion can be burdened.

A 2016 Pew poll showed Americans split down the middle on whether religious business owners who work in the wedding industry should be required to provide services to same-sex couples or be allowed to refuse. A much higher percentage — 67 percent — said employers with religious objections to providing contraception as part of their health-care plan should still be required to do so.

“On the one hand, you look at the [Supreme] Court, and especially with Barrett, religious freedom will be locked up for a while, even as the culture is moving in this other direction unabated,” said Daniel Bennett, a political scientist at John Brown University who focuses on religion.

But this feels like a moment of huge potential for some religious groups and their advocates — religious conservatives in particular — who in recent decades have come to see themselves as endangered.

That sense of threat prevails even though many religious liberty experts across the ideological spectrum agree that the legal place of religion has been getting stronger and more secure in the last decade or so. There have been multiple high-profile recent wins at the Supreme Court . . . . Those cases touch on the two big arenas of religion in constitutional law — the establishment clause and the free exercise clause. Establishment cases deal with the Constitution’s ban on Congress endorsing, promoting or becoming too involved with religion. Free exercise cases deal with Americans’ rights to practice their faith.

Barrett’s addition to the court raises concerns among some that the balance will tilt further toward religious privilege for some at the expense of the nonreligious and religious minorities.

“Does the establishment clause work with the free exercise clause to protect equality in religious freedom for all, instead of just for some?” asked Rachel Laser, president of Americans United for Separation of Church and State. Barrett’s record, Laser said, shows “she’s willing to use religious freedom as a sword, not a shield. So we’re concerned how that will come down.”

[I]f the court decides to toss Smith and go back to the previous standard — which strongly limited when government could burden religion — or to substantially alter it, that would present a significant challenge to some of the progressive agenda. That includes Democratic presidential candidate Joe Biden’s vow to introduce an Equality Act that he says would end religious exemptions to LGBTQ protections.

Personally, I continue to view religion (a man-made construct typically used to divide or penalize an unpopular group), especially as practiced by its more far right adherents, to be one of the great evils in the world.   Religious belief should be subordinate to all civil non-discrimination laws.  Similarly, unless 100% engaged in charitable work, religious institutions including all churches should lose tax-exempt status.

Posted by Michael-in-Norfolk at Wednesday, November 04, 2020