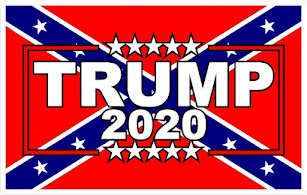 Still lagging in the polls, Donald Trump is about to intensify the racism and fear mongering that marked his 2016 campaign.  One can only hope that apathetic blacks and Hispanics - and younger voters too - who failed to vote in 2016 belatedly understand that Trump must be defeated in 2020 or else their futures may be far worse than their current circumstances. Frighteningly, a substantial minority of whites seem completely accepting of Trump's racism and seemingly would bring back segregation if they could do so. By all appearances, Trump hopes to fear monger enough additional whites to pull the lever for him in 2020 in order to eek out another Electoral College win while losing the popular vote by millions of votes  (showing again why the Electoral College needs to be abolished).  Disturbingly, protesters in numerous cities fail to grasp that they are playing directly into Trump's game plan every time violence breaks out even if the violence is sparked by right wing Trump supporters. The best form of protest is to get registered to vote and vote en mass like never before against Trump and every Republican up and down the ballot.  A piece in New York Magazine looks at Trump's cynical and morally bankrupt default to open racism in the ongoing campaign.  Here are highlights:

It was on what Democrats and even Republicans might agree was the most tedious night of this outrageous convention — Wednesday, . . . . that I started to see how Trump could win reelection in spite of everything. And to fear that if he didn’t, he would stop at nothing to take an already teetering country down with him. Next to that commanding reality, the usual morning-after questions we ask about political conventions seem almost quaint and beside the point.

Sure, the convention was designed to energize the party’s base, but I dare say that any voter who was motivated to watch all or large chunks of this convention is already motivated to show up to vote. And sure, the entire spectacle was a monument to Trump’s ego

As for those coveted undecided voters in battleground states, how many were actually tuned in? Harry Enten, the poll guru at CNN, says that “maybe 15 percent of voters” are watching either convention, “most of whom are hardcore partisans.”

As Trump would define it in a rare moment of focus during his endless drone of an acceptance speech, a vote for Joe Biden is a vote to “give free rein to violent anarchists and agitators and criminals who threaten our citizens.” The corollary, stated directly by Carlson and repeatedly embraced by Trump, is that arms-bearing white Americans can’t be faulted for wanting to take the law into their own hands.

For “anarchists and agitators and criminals,” read “Black people.” This racially tinged “law and order” message is nothing new either for Trump or a GOP that has been pursuing a “Southern strategy” since Richard Nixon codified it half a century ago.

[W]hat grabbed my attention on the convention’s sleepy third night was how Trump, on the ropes in summer polling, is nonetheless determined to take that message to a new and even more dangerous level by fomenting racial violence if need be. He will not only continue to boost arms-bearing white vigilantes as he has from Charlottesville to Portland, but, when all else fails, unabashedly pin white criminality on Black Lives Matter protesters.

Literally so. While the unrest in Kenosha was referenced repeatedly on Wednesday night, no one mentioned that the violence was all committed by white men: Rittenhouse, and Rusten Sheskey, the police officer who shot Jacob Blake seven times in the back while his three young sons looked on.

Next to this incendiary strategy, the other manifest sins of the week, though appalling, seem less consequential as we approach the crucial post–Labor Day campaign.

But aside from the 42 percent or so who consistently approve of Trump no matter what he or those around him do, most other Americans will see for themselves whether COVID-19 has evaporated or their economic security has improved this fall. Those are realities that Trump, for all his subterfuge, cannot alter. But racial animus is a less tangible and more enduring factor in America’s political fortunes, and it has been a toxic wild card in every modern election.

In that sense, the most predictable alternative reality spun by the convention was the recruitment of seemingly every black Republican official in the country to testify on camera that Trump and his party love what he calls “the Black people.” This gambit is a GOP staple. At George W. Bush’s 2000 convention in Philadelphia, there were more African-Americans onstage

Then as now, this effort was not so much intended to woo unattainable Black voters as to “give permission” to white voters to put aside any guilt they might feel about casting votes for a party that habitually plays the race card.

But 2020 is not 2016. Bush was not widely seen as a racist. Trump is, and, unlike Bush, he commands a party that doesn’t even bother to hide its alliances with white supremacists. The suburban white women that pollsters tell us Trump has lost since 2016 know this about Trump and the GOP, and I imagine that the Trump campaign knows they know it. . . . . it’s time for Plan B, a fear campaign with no boundaries that might yet push defecting 2016 Trump voters back into the camp.

Biden had it exactly right when he characterized this plan on Thursday by calling out Trump for “pouring gasoline on the fire” and “rooting for more violence, not less.” That was true from day one of the convention, when the gun-toting St. Louis couple, the McCloskeys, were given a prominent spot in the festivities

But it’s not enough for Biden to identify the strategy that is being unleashed to derail him, and it shouldn’t have taken him most of the week to get to the point. He’s in a fight for his and the country’s life. A Democratic campaign that was pitched most of all on targeting Trump’s criminally negligent response to the pandemic must now pivot to combat the most lethal of all American viruses, racism, in its most weaponized strain.