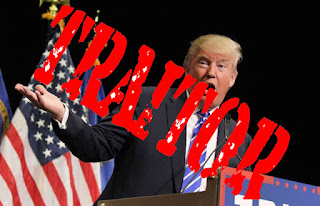 As noted in the previous post, the non-stop reporting on ties between Trump campaign officials and Russian intelligence agents has Der Trumpenführer in a foul mood and seems to be linked to his delusional claim that Barack Obama had the phones in Trump Tower wire tapped.  Why the hysteria?  Because polls indicate that many Americans support further investigations of the Trump-Russia ties be it through Congressional investigations or otherwise. If collusion indeed with a hostile enemy foreign power occurred - and let's face it, Trump is well aware as to whether it occurred or not - Trump has ever reason to want to shut down investigations before the truth is revealed.  Politico looks at the popular support for further investigation which has to have Trump worried.  Here are excerpts:

An NBC News/Wall Street Journal poll released this week asked Americans if they believe that Trump’s relationship with Russian President Vladimir Putin is “too friendly” or not. A 38 percent plurality called the Trump-Putin relationship too friendly, more than the 29 percent who said it wasn’t too friendly. Nearly a third, 32 percent, didn’t have an opinion.

When it comes to the Trump-Russia issue, there are two parallel trends that should raise red flags for the White House. First, as Americans have formed opinions on the issue, it has been to Trump’s detriment. Since December, the percentage of undecided Americans on the Trump-Putin relationship has declined from 44 percent to 32 percent. At the same time, the percentage who view Trump as too friendly with the Russian leader has risen from 31 percent to 38 percent.

Moreover, while nearly two-thirds of Democrats feel Trump is too friendly with Putin, only half (52 percent) of Republicans feel he isn’t too friendly with his Russian counterpart. Independents are unsure about Trump’s relationship with Putin — but more feel they are too friendly (35 percent) than think they aren’t (27 percent).

[M]ultiple surveys show widespread support for new and continued investigations into Trump’s connections with Russia, despite the president’s assertions that the controversy is contrived by the media to obscure the much-reported fact that Trump won last year’s election.

In the NBC News/Wall Street Journal poll, majorities think the Congress should investigate both whether or not there was contact between Russian officials and individuals in Trump’s campaign (53 percent) and whether the Russian government interfered with the election (54 percent).


If Trump is guilty of possible treason, even his narcissistic ass has to be very worried.
Posted by Michael-in-Norfolk at Saturday, March 04, 2017