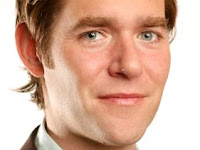 UPDATED: The Virginian Pilot has expanded its initial coverage and now reports on Moore's sexuality. Better late than never.
*
There's been a great deal of coverage in the blogosphere on the tragic untimely death of Perry Moore, executive producer of the "The Chronicles of Narnia" trilogy and author of the young adult novel "Hero," from an apparent accidental overdose of OxyContin prescribed to him following surgery. Although most of the coverage doesn't mention it, Moore grew up in Virginia Beach. And in terms of local coverage, reading the Virginian Pilot coverage, one would never know that Moore was gay and had a life partner. Apparently, the Pilot feels that knowing the full truth would be more than the local Bible beaters can handle. It's yet another sad case of many in society being prevented from knowing that figures that they know of - and possibly highly respect - are gay. Pink Paper.com also has tidbit that ought to be known as an indictment of this generally homophobic and backwards region:
*
Moore, who was waiting to hear news about a new screenplay proposal, revealed his anguish at growing up gay in a religious Southern community during an interview two years ago. “I thought I’d have to kill myself,” he said. “Because I grew up going to church in the south and the pervasive message was that I had this terrible secret that I liked men and consequently I would go to hell for it and ruin my family’s life.”
*
Unfortunately, the Hampton Roads region and Virginia as a whole continues to ingrain that same toxic message in LGBT youth. For those who want to honor Moore's memory, stamping out religious based homophobia would be a worthy under taking. MTV had this to say about Moore's passion on the topic:
*
Moore was passionate about the portrayal of gay characters in comics. Wanting to create a positive, gay super, Moore wrote "Hero," the story of Thom Creed, a high school basketball star who must simultaneously deal with both his emerging powers and sexuality.
*
One of the last things Moore ever linked to on his personal website was a 2008 story on MTV about "Hero" being turned into an hour long series. According to WTKR, Moore was still working on bringing "Hero" to TV at the time of his death.
*
The number of ruined lives and needless deaths from wars of religion demonstrates that more often than not, religion is one of the greatest forces of evil in the world.
Posted by Michael-in-Norfolk at Sunday, February 20, 2011

News of Perry Moore's death is sad as well as shocking.

I saw him at the Virginia Film Festival in Charlottes­ville a couple of years ago, where he participat­ed in a panel discussion about the making of “Lake City” (which was partly filmed in Virginia). He had a lively and friendly manner. (Video of that panel, which also included Sissy Spacek, Hunter Hill, and Troy Garity, can be seen here: http://bit­.ly/geory0 )

It’s too bad that “Lake City” did not get wider distribution. Perhaps now, despite the unfortunate circumstances, audiences will take a second look at the movie, which also includes Dave Matthews in its cast. (He plays the bad guy, btw.)