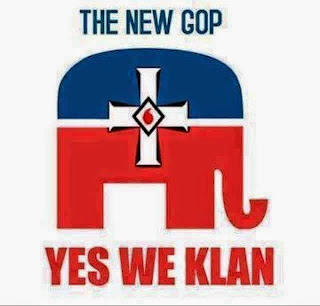 Since the days when I grew up in a Republican family and then served on the City Committee for the Republican Party of Virginia Beach for eight years, two steady trends have taken control of the party: (i) the rise of the Christofascists and the religious extremism they embody, and (ii) increasing overt racism.   True the GOP appeals to racism are often coded and in dog whistle form, but the under current has grown steadily.  In my view, the two trends are intertwined because the bulk of the Christofascists trace to the Bible Belt where for so long fundamentalist religion and racism/segregation went hand in hand.  A piece in Salon looks at the rise of racism in the GOP as a matter of policy even as it has become more coded.  The end result?  The GOP encourages most whites to vote against their own best interests by playing to racial prejudice.  Here are highlights:

How did this happen? It is certainly not because less of the population now benefits from these programs — the middle class has actually weakened since that period, and unemployment insurance and Social Security are today as important as ever. Nor is it because much of the working class woke up one day and decided to turn their backs on a system of government that had helped them achieve a better lifestyle. The reason is much more insidious than that.

The rise of modern conservatism can be traced back to the mid-sixties, as a reaction to the Civil Rights movement. In the south, the New Deal had been wholeheartedly supported by the Southern Democrats, and as Eisenhower’s quote reveals, the Republican party could not fight the movement without risking major political losses — until the federal government decided to step in on civil rights issues in the South, that is.

1964 was a pivotal year for the rise of modern conservatism. This was, of course, when the Civil Rights Act passed, and outlawed discrimination based on race, color, religion, sex, or national origin, and ended the racial segregation that had existed for so long in the South. To southerners, this was an enormous betrayal by the Democratic party, especially from President Lyndon Johnson, who was himself a Southern Democrat. The federal government had overstepped in many minds, and this was an opening for the small government conservatives to once again capture the minds of common working class people.

In a truly opportunistic fashion, the Republican Party decided to exploit the racial fears and prejudices of much of the populace, and the Southern Strategy was born. State’s rights had been trampled on by the federal government, so the thinking went, and in 1964, Barry Goldwater ran an election based on anti-New Deal and states’ rights policies. His coded racism was successful, and it earned the votes from five southern states and his own, though he lost every other state to Johnson. Though not as aggressively conservative as Goldwater, Richard Nixon pursued a similar strategy 1968, and won all of the former confederate states, turning the south into the solid Republican territory that it remains today.

Of course, this racial force is more unconscious today than it was when the Southern Strategy began, just as the language has changed over the years. In a candid and originally anonymous interview, Reagan’s 1984 campaign director Lee Atwater described how racial language became more coded over the years:


“You start out in 1954 by saying, “n***er, n***er, n***er,” Said Atwater, “[But] by 1968 you can’t say ‘n***er’ — that hurts you. Backfires. So you say stuff like forced busing, states’ rights and all that stuff. You’re getting so abstract now, you’re talking about cutting taxes, and all these things you’re talking about are totally economic things and a byproduct of them is, blacks get hurt worse than whites.”

Today, while there is no doubt that a large part of the population remains willfully racist, a great number of people have also become unconsciously so, buying implicitly into stereotypes about Black Americans as dependent and lazy; and thus determined to stop social programs and limit the federal government’s influence — even if it is not to their own benefit. In a sense, much of the middle class population has been hoodwinked into voting for the interests of the top one percent because of their own unconscious prejudices.

It is hard to claim that racism is not involved with the current backlash against Obama. The fight against the originally centrist Obamacare is based on the fears that have been embedded in so much of the population today. It is a fear of the federal government — a fear that Thomas Jefferson once had, before his views seemed to become more pragmatic when elected president. The key word here is fear; modern conservatism is based on this this unpleasant emotion — an emotion that tends to induce irrational thinking. And what is more irrational than voting against your interests?