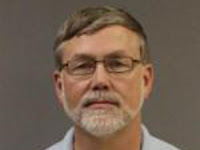 When it comes to liars and snake oil merchants few exceed the dishonesty and hypocrisy of the "ex-gay" industry which shakes down vulnerable victims and/or self-centered parents of gays just as smoothly as Karl Rove conned his millionaire and billionaire (former) friends.  Like Rove, these "ex-gay" frauds and their "ministries" deliver nothing.  Adding to the hypocrisy is that many of these "ex-gay" proponents are  themselves gay as a goose.  And some, like Rev. Ryan J. Muelhauser (pictured at right), senior pastor at Lakeside Christian Church, are anything but cured themselves.  Muelhauser has been charged with taking sexual liberties with those he was supposedly counseling to turn straight.  The sad truth is rather than engage in fraudulent "ex-gay" programs and bogus "ministries" gays and their families need to jettison the religious brainwashing and bullshit that makes them upset about homosexuality in the first place.  Every state needs to ban "ex-gay" therapy for minors as California recently did.  These "ministries," "clinics," and "counseling" are both fraudulent and harmful.  Huffington Post has coverage on Muelhauser's arrest. Here are story excerpts:

An ordained counsellor dedicated to 'freeing' people from homosexuality has been arrested on charges of molesting two young men over a period of two years.

Muelhauser was connected with OutPost Ministry; an anti-gay ministry that proclaims on its website:


The Father's great desire for those struggling with same-sex attractions and other sexual and relational brokenness motivated Him to send His one and only Son Jesus to be the Way out of slavery to sin.

Posted by Michael-in-Norfolk at Friday, November 09, 2012