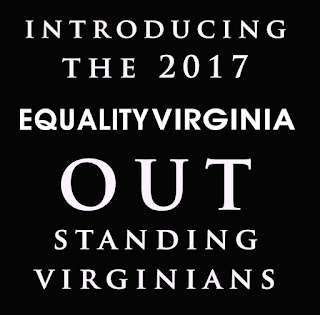 Each year for the last eight years Equality Virginia ("EV") - Virginia's leading LGBT advocacy group - honors individuals at its Commonwealth Dinner gala in Richmond that it describes as "Outstanding Virginians"  EV describes the designation as follows:

Statistics show that knowing someone within the lesbian, gay, bisexual and transgender community increases support for LGBT rights. This positive correlation makes coming out a critical component of the LGBT movement’s future progress.

OUTstanding Virginians are  lesbian, gay, bisexual, transgender, and allied individuals or organizations that are taking the lead in moving equality forward across the commonwealth.In light of the importance of being out to the LGBT movement, each year Equality Virginia recognizes leaders who have represented the community with distinction.

The 2017 OUTstanding Virginians will be honored at the 14th Annual Commonwealth Dinner on April 1, 2017.


Much to my amazement I am  one of the seven (7) honorees for 2017.  The portion of the initial announcement that pertains to me reads as follows (a more detail bio and description will soon appear on the EV website): 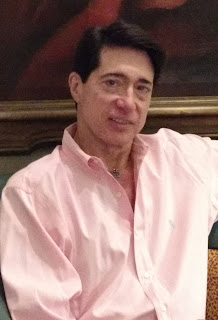 Michael Hamar, Norfolk: Michael is an ardent advocate for LGBT rights locally and throughout the state. He writes an internationally read blog on political and LGBT issues, and articles for Veer and Unity magazines, and supports many LGBT and progressive political organizations and leaders. In 2005 after Hurricane Katrina devastated the gulf coast, he worked to find safe housing and support in Virginia for LGBT residents who lost their homes. He also created an endowment in his late parents' names to help LGBT students attend college.

I am very humbled to have been chosen for this award.  I hope that readers in Virginia will consider attending the Commonwealth Dinner on April 1, 2017 at the Richmond Convention Center. Details on the dinner and how to purchase tickets can be found here (the husband and I are table hosts, so sign up to be at one of our tables).  Each year 1200-1500 people attend and the event is usually heavily attended by politicos and some celebrities.   Hope to see you in Richmond!!

Email ThisBlogThis!Share to TwitterShare to FacebookShare to Pinterest
Labels: Equality Virginia, living out and proud, Outstanding Virginians, Richmond, the husband

Congratulations. We need more voices like yours to be heard.

Scott, thank you for your kind words.