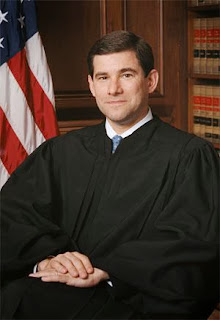 Once again we are seeing the possible unmasking of a virulently homophobic Republican.  This time, however, it's not a GOP elected official but instead a federal judge in Alabama.  William Pryor does seem to fit the usual mold: married, "devout Catholic," ultra-far right, and anti-gay, anti-woman and anti-minority.  Indeed, he seems cut from the same cloth as Rick Santorum and Ken Cuccinelli.  A piece on Pryor during the time period a decade ago when he was being considered for the federal bench described him this way:

He holds the ignominious honor of being the only attorney general to file a brief attacking the Violence Against Women Act. Ever the defender of prudish virtue, Pryor threw himself into a defense of Alabama’s Dildo Law, which forbade the sale of vibrators. Dredging deep into the recesses of Federalist Society legal theory, Pryor argued that there is no right to privacy in Alabama and that the state had the authority to outlaw any kind of pleasure devices it wanted, even when accompanied by a doctor’s prescription. Naturally, Pryor is unwilling to apply the same legal mumbo jumbo to assault weapons.

His homophobic sentiments rival those of Senator Rick Santorum, the famously anti-gay Republican from Pennsylvania. In an amicus brief filed with the Supreme Court in the Texas same-sex sodomy case, Pryor urged the court to uphold the ban. "A constitutional right that protects ‘the choice of one’s partner’ and ‘whether and how to connect sexually’ must logically extend to activities like prostitution, adultery, necrophilia, bestiality, possession of child pornography and even incest and pedophilia." Santorum and Pryor must have attended the same Christian Coalition prayer breakfast.

But that's not the juicy part.

Judge Pryor is a notoriously staunch right wing conservative. Though he was cool with gay guys ogling his fully erect, full frontal naked self, he's not cool with gays and lesbians walking the streets as free people. According to People for the American Way, Judge Pryor "would deny gay men and lesbians the equal protection of the laws. He believes that it is constitutional to imprison gay men and lesbians for expressing their sexuality in the privacy of their own homes and has voluntarily filed an amicus brief in the Supreme Court urging the Court to uphold a Texas law that criminalizes such private consensual activity."

Of course, Pryor insists the pictures are not him, though apparently, a republican colleague in Alabama was quick to confirm that they are. "Holy cow, that's Bill Pryor!" he said. 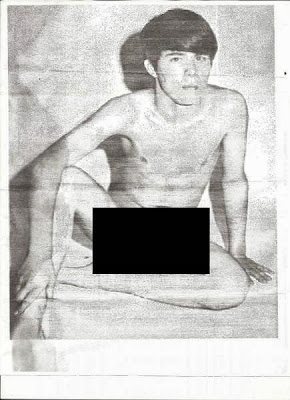 Posted by Michael-in-Norfolk at Saturday, September 21, 2013