Barr Has Made a Total Mess of the Mueller Report, and Undermined DOJ 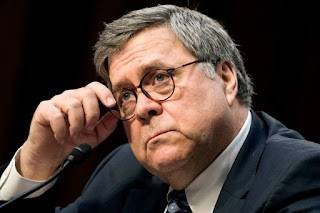 Many felt that William Barr should never have been confirmed as Attorney General given his unseemly effort to audition for the position by releasing an unsolicited opinion that basically trashed the basis for the Mueller report and made the argument that the office of the president was above the law - a concept that would have shocked the Founding Fathers. Through his handling of the release of the Mueller report, Barr has confirmed the worse fears of his critics and, worse yet, has further damaged the reputation and public perception of the U.S. Department of Justice. What is puzzling to many is why Barr - who was retired and had a decent reputation - has chosen a course that will likely sully him in the view of history not to mention further undermine the public trust in governmental institutions. Is the public political fellatio of Donald Trump worth that? Barr's window of opportunity to save his own reputation and that of the Justice Department is closing rapidly and time will tell if he will opt throw away and shred of honor and principle like so many Republicans have done to date.  A piece in Politico looks at the damage Barr is doing. Here are highlights:


Ever since would-be First Gentleman Bill Clinton stepped onto Attorney General Loretta Lynch’s plane in June 2016, the Justice Department has found itself in the worst position possible for a nonpolitical law enforcement agency — that of leading actor in the nation’s most hotly contested political dramas.

William Barr’s confirmation as Sessions’ successor was supposed to provide a reset to those turbulent times. A respected former attorney general who didn’t need the job, he promised that his extensive experience and end-of-career status would allow him to make decisions regardless of what a president notoriously hostile to the Justice Department’s normal practices wanted.

Instead, Barr’s handling of the conclusion of the 22-month long investigation by special counsel Robert Mueller into Russian interference in the 2016 election has thrust a new cloud over the Justice Department and his leadership, one that has grown darker with the reports that some members of the special counsel’s team believe he has mischaracterized their findings and needlessly inserted himself into the process to make his own determination as to whether the president obstructed justice.

Barr has also moved the goal posts on what categories of information would be redacted from the report, adding two new ones to the list he announced on March 24, while refusing so far to ask a court for permission to release grand jury material, as the Justice Department did at the conclusion of two previous investigations into presidential misconduct.

The attorney general’s actions raise suspicions about whether he is acting primarily to benefit [Trump] the president because they don’t make sense when viewed through any other lens. Barr is neither inexperienced nor naive, yet when deciding among the several options available to him when he received Mueller’s report, he chose the one course of action that would raise questions about his own integrity and plunge the Justice Department into political controversy.

Barr simply could have told Congress that he had received the report and would make a version available when he had completed his review and made appropriate redactions. He could have released Mueller’s principal findings, as he initially said he would do, without adding his own conclusion on obstruction of justice. Or he could have released one of the multiple summaries prepared by Mueller’s team while review of the full report continued.

Barr instead chose the one path that could call his behavior into question, while negating the entire reason for appointing a special counsel in the first place: to ensure that the taint of politics is removed from the Justice Department’s decision-making. That choice would be odd for any attorney general. It makes even less sense for one whose impartiality was questioned from the outset, given that he was chosen for the job after he wrote an unsolicited memo questioning some of the very foundations of the special counsel’s investigation.

Barr still has a chance to lift the cloud his actions have placed over his leadership, but to do so, he will have to reverse course quickly. . . . he should follow the precedent the department set in both the Starr investigation and the 2016 Clinton email investigation and provide underlying investigative materials to lawmakers.

Mueller is one of the most talented and respected prosecutors of his generation, and his integrity will accrue to Barr’s benefit, if only Barr will let it. The sniping the Justice Department has directed toward the special counsel’s office in the press over the past two weeks, both on the record and through leaks to reporters, is not just unseemly — it also hurts the entire department and its ability to do its job.

If the Justice Department has any hope of restoring the reputation that has been tarnished — sometimes fairly, sometimes not — through the past three years of political combat, it will be by leaning on Mueller’s hard-earned reputation and letting his work speak for itself. Barr should get out of the way and let that happen. Otherwise, he will deserve all the criticism he gets, and both he and the Justice Department will suffer for it.