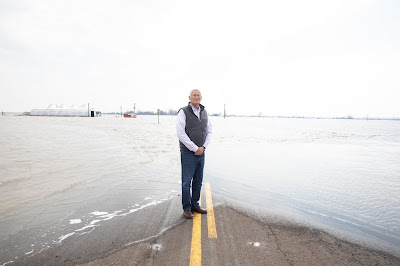 The Mid-West remains a bastion for Trump and the Republican Party yet now, the failed policies of the Trump/Pence regime and the GOP are coming home to roost.  Years of inadequate infrastructure spending and denial that climate change is real is colliding head on with some of the worse flooding ever and the aging and sporadically repaired levees are failing in record numbers. The GOP aversion for taxes ignores the reality that infrastructure such as roads and in this case levees, do not miraculously spring out of nowhere and that taxes are needed for the same. Go to France or the UK and you see far better maintained roads and public transit.  They pay more in taxes, but they get something in return (and that doesn't even consider their far better healthcare delivery for the majority of the population, not just the wealthy).  A piece in the New York Times looks at the ongoing disaster in large parts of the Mid-West. One can only wonder what botched disaster relief Trump/Pence will deliver and when voters will wake up to the reality that allowing their votes to be swayed bu appeals to racism and hate is actually against their own economic interest.  Here are article excerpts:

On the river-specked Midwestern prairie, the thousands of miles of levees are an insurance policy against nature’s whims that, at their best, keep cropland and towns dry, floodwaters at bay and the agriculture-driven economy churning. But the levees are aging, subject to uneven regulation and, in many cases, never designed to withstand the river levels seen in the last decade.

Many of the levees, usually earthen and topped with grass, were built by farmers decades ago and are now managed by a patchwork of local government agencies known as levee districts that often do not coordinate or even follow the same rules. With increased flooding in the past few years, the levees are being tested more frequently than ever before, straining the finances and expertise of some of those districts. The levee situation has become so grave that the American Society of Civil Engineers gave the country’s levee system a D grade in 2017, suggesting $80 billion in investment over 10 years.According to the United States Army Corps of Engineers, which oversees infrastructure on the Missouri River and some of its tributaries, at least 62 levees had been breached or overtopped in the Midwest in March, and hundreds of miles of levees had sustained damage.

“Our levees are big and they’re good,” Mr. Ideker said, but they were no match for this new normal. “Every event seems like it’s higher. It’s higher water. You build the levee higher. And the next time you build it higher. You can’t keep up with it.”

The situation has been exacerbated by wetter rainstorms, which are expected to worsen over time and have been attributed to climate change.

“There are layers that come together when big events like this happen — it’s never just one thing,” said Barbara Mayes Boustead, a meteorologist with the National Weather Service who contributed to a 2018 federal report on climate change.

“We’re seeing more water in the river, but we haven’t improved the infrastructure,” said Mr. Waters, who farms along the Missouri River east of Kansas City, Mo. “Basically, when it comes to levees and flood control protection, we’re still driving on gravel roads and we’re trying to handle interstate traffic.”

But building ever-higher levees is not a panacea: Keeping water out of one area only means it will go somewhere else.

In the early 20th century, the Army Corps of Engineers and towns along the Mississippi River followed a “levees only” policy that meant building higher and higher walls, leaving the river no way to release its power. That strategy failed spectacularly in the Great Flood of 1927, which inundated 27,000 square miles and displaced one million people. In the aftermath, officials built a more complex Mississippi River system that included a network of spillways and flood ways, as well as other tools, along with the levees.

In the areas hardest hit this past month, where levees are shredded and livelihoods shattered, many blame the Corps. In recent weeks, politicians from some of the flooded states have become vocal critics of the river management plan and called for the prioritization of flood control.

The devastation to the levees has left much of the Midwest with nothing to hold back the waters from even a relatively minor flood, which forecasters have warned is possible in the weeks ahead.As water recedes, at least for the moment, and the conversation shifts to recovery, many in the river bottom said they planned to stay and rebuild, hopeful that policies might change. Others said these levee breaks were probably their last.

“It’s not that I don’t want to be here,” said Rhonda Hunziger, the mayor of Craig, Mo., population 230, where residents piled sandbags through the night in a spirited but futile attempt to save their town from the Missouri River after surrounding levees burst.

Depending on what the insurance company decided, Ms. Hunziger said this could be the flood that forced her to higher ground. “I have lived with floods my whole life,” she said while staring out at the brown-hued water covering her nearly empty town. “And I am about ready to get off the bottom.”