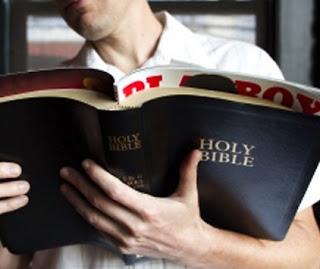 As numerous posts over the years have noted, the great majority of political sex scandals involve Republicans, including "family values" Republicans caught in same sex scandals (think GOP Senator Larry Craig or former Virginia 2nd district GOP Congressman Ed Schrock for starters).  At the same time, numerous reports find that the highest Internet porn usage is in the Bible Belt.  What's going on?  I've always believed that both phenomenon were a function of the repressive political and religious atmospheres in which the right wing types live: they are supposed to be monogamist who wouldn't even dare "lust in their hearts" over anyone but their spouse.  Yet, in reality, they want to have forbidden sex - seemingly lots of it.  A new study which looked at sexual fantasies of Republicans and Democrats seems to bear out this view of Republicans longing for "forbidden sex."  Less sexually repressed Democrats have far less longing for sex that involves infidelity.  A piece in Politico looks at the findings.  Here are some excerpts:

I surveyed 4,175 adult Americans from all 50 states about what turns them on and published the findings in a book entitled Tell Me What You Want. As part of this survey, participants were given a list of hundreds of different people, places and things that might be a turn-on. For each one, they reported on how frequently they fantasized about it.

I learned a lot about the nature of sexual desire in modern America, but one of the more intriguing things I uncovered was the political divide in our fantasy worlds.

As I argue in Tell Me What You Want, the supersized sexual appeal that non-monogamous and voyeuristic acts hold for Republicans likely stems from the fact that sex outside of marriage and multi-partner sex are huge no-nos in a political party that continues to make “traditional marriage” one of the cornerstones of its official platform and regularly funnels federal funds toward abstinence-only sex education. Nothing makes us want to try something like being told you can’t do it. This is why taboos, no matter what they are, often become turn-ons.

The appeal of the taboo stems from a long-standing principle of psychology known as reactance—which stipulates that when our freedom is threatened and we’re told we can’t do something, we want to do it even more. Many a parent has discovered this principle and used it to their benefit in shaping their children’s behavior through reverse psychology: Frame the desired act as something your child isn’t allowed to do and you just might get what you want.

To be sure, sexual fantasies have complex origins. They aren’t just a product of our political affiliation and what we’re told we can’t or shouldn’t do—there are myriad other factors that contribute to why we develop the turn-ons that we do. But my research suggests that politics certainly seems to play some role.

Following [Sarah] Palin, the next most frequently mentioned politicians in Republicans’ fantasies were John F. Kennedy, Bill Clinton and Nikki Haley. . . .  (Note that my data were collected in 2014 and 2015 before the Trump presidency began and only into the early days of his campaign. At that time, I only received one fantasy about Donald Trump in the entire dataset.)

Again, it was nice to see my analysis about sexually repressed Republicans - and by extension, Christofascists - borne out.
Posted by Michael-in-Norfolk at Sunday, October 28, 2018