Hate Is on the Ballot Next Week 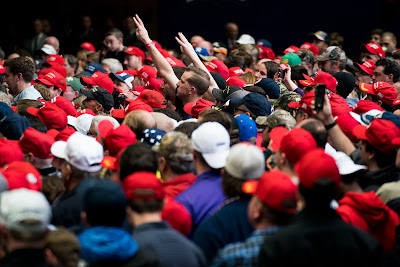 The midterm elections are a week from today.  On the ballot are many Republican and Democrat candidates and various others.  But there is something else on the ballot: hate and division.  Sadly one parties - the GOP which I belonged to for years - is now the the party of hate while the Democrats stand for equality for all and believe that one's rights should not be dependent on one's skin color, creed or sexual orientation.  A column in the New York Times looks at this reality.  Those who claim to be decent, moral people have a hard choice to make: are they going to vote Republican out of habit and possible racial animosity or are they going to vote for decency and in the process condemn purveyors of hate towards others.  We are not talking about political differences.  We are talking about who supports morality and decency and who does not.  Sadly, a vote for any Republican candidate makes one complicit in demonizing and disseminating hate and division. It's a black and white choice.  Here are column highlights:

In case you hadn’t noticed, we’re in the midst of a wave of hate crimes. Just in the past few days, bombs were mailed to a number of prominent Democrats, plus CNN. Then, a gunman massacred 11 people at a Pittsburgh synagogue. Meanwhile, another gunman killed two African-Americans at a Louisville supermarket, after first trying unsuccessfully to break into a black church — if he had gotten there an hour earlier, we would probably have had another mass murder.

All of these hate crimes seem clearly linked to the climate of paranoia and racism deliberately fostered by Donald Trump and his allies in Congress and the media.

Killing black people is an old American tradition, but it is experiencing a revival in the Trump era.When the bombs were discovered, many on the right immediately claimed that they were fake news or a false flag operation by liberals. But the F.B.I. quickly tracked down the apparent source of the explosive devices: A fanatical Trump supporter, whom many are already calling the MAGABomber. His targets were people and a news organization Trump has attacked in many speeches.The man arrested at the Tree of Life synagogue has been critical of Trump, who he apparently believes isn’t anti-Semitic enough. But his rage seems to have been fueled by a conspiracy theory being systematically spread by Trump supporters — the claim that Jewish financiers are bringing brown people into America to displace whites.

This conspiracy theory is, it turns out, a staple of neo-Nazis in Europe. It’s what our own neo-Nazis — whom Trump calls “very fine people” — were talking about in Charlottesville last year, when they chanted, “Jews will not replace us.”

It’s also the barely veiled subtext of the manufactured hysteria over the caravan of would-be migrants from Central America. The fearmongers aren’t just portraying a small group of frightened, hungry people still far from the United States border as a looming invasion. They have also been systematically implying that Jews are somehow behind the whole thing. There’s a straight line from Fox News coverage of the caravan to the Tree of Life massacre.

So how are Trump apologists dealing with this ugly picture? Partly through denial, pretending not to see any link between hateful rhetoric and hate crimes. But also through attempts to spread the blame by claiming that Democrats are just as bad if not worse. Trump supporters try to kill his critics? Well, some Trump opponents have yelled at politicians in restaurants!False equivalence, portraying the parties as symmetric even when they clearly aren’t, has long been the norm among self-proclaimed centrists and some influential media figures. It’s a stance that has hugely benefited the GOP, as it has increasingly become the party of right-wing extremists.

You might have thought that the horrifying events of recent days would finally break through that norm. But you would have been wrong. Bothsidesism is, it turns out, a fanatical cult impervious to evidence.

This needs to stop, and those who keep practicing bothsidesism need to be shamed. At this point, pretending that both sides are equally to blame, or attributing political violence to spreading hatred without identifying who’s responsible for that spread, is a form of deep cowardice.

The fact is that one side of the political spectrum is peddling hatred, while the other isn’t. And refusing to point that out for fear of sounding partisan is, in effect, lending aid and comfort to the people poisoning our politics. Yes, hate is on the ballot next week.

Posted by Michael-in-Norfolk at Tuesday, October 30, 2018