Why Republicans Are Choosing to Go Down With Trump 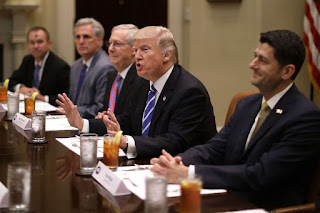 The seeming willingness of Congressional Republicans (with very few exceptions) to sake the future on Donald Trump, a narcissistic pathological liar whose approval level has fallen to 36% in some ways appears baffling.  Yes, the party base has become a toxic brew of Christian religious extremists and white supremacists with a sprinkling of greedy billionaires, but at some point one would hope that the future of the country would trump - no pun intended - partisanship and clinging to a file individual.  Sadly, as a piece in Vox argues, two factors convince Republicans to stay with Trump to the bitter end: (i) the fear of primary challenges by Trump's unhinged base, and (ii) an insatiable lust for power that means that Republicans simply cannot allow Democrats to win no matter the consequences to the nation.  It's a disturbing picture, but one that appears to accurately describe the current situation confronting the country.  The prognosis is likely not a good one.  Here are article excerpts:

Last week, I wrote a piece that asked, “Will Republicans impeach Trump?” The short answer: unlikely.

In this piece, I want to explore how much this “unlikely” conclusion flows from the zero-sum logic of our two-party system. The short answer: a lot.

Because of the two-party system, Republicans are stuck with Donald Trump. If he goes down, they go down with him. There’s now no way for Republicans to advance conservative policy goals without also advancing Trump. And In this era of bipolar two-party tribal politics, no matter what Trump does, there’s always one thing worse for Republicans. Something even more unthinkable, something even more existentially frightening than Trump with his hand on the nuclear codes: Democrats having power.

Most congressional Republicans never wanted Trump as their standard-bearer. They still don’t. But their fates are now tied to him. If Trump goes down in a dramatic impeachment (is there any other kind?), Republicans almost certainly lose their House majority in the 2018 midterms, and probably continue to suffer the repercussions in 2020. And there’s a real risk that if Trump goes down, he tries to take all the furniture with him, fracturing the Republican Party.

So Republican congressional leaders are stuck. The only thing worse than having Trump as their unpopular standard-bearer is losing power and popularity because they tried to remove him as their standard-bearer.

We saw this in the presidential election. One by one, Republican leaders who had criticized Trump decided to forget all the things they said about Trump being a con artist, utterly amoral, a pathological liar. The most important thing was preventing Hillary Clinton from becoming president. Donald Trump was a vote against Hillary Clinton. There was no alternative, only a binary choice.

Many voters felt the same way. They had reservations aplenty about Trump. But right-wing propaganda told them to remember “all the children Hillary Clinton has personally murdered and chopped up and raped.” Some were convinced that “Clinton will demolish America as we know it, and every human life will be under government control.” As talk show host Dennis Prager put it recently in a National Review article (italics mine): “Many conservatives, including me, believe that it would have been close to over for America as America if the Republican candidate, who happened to be a flawed man named Donald Trump, had not won.”

Whether motivated by power or by the existential righteousness of their moral cause (or more likely, by a complicated, self-justifying mix of both), Republican leaders continue to make the same craven calculus . . . .

What would happen if they joined with Democrats to call for Trump’s impeachment?  Many of these Republicans would likely find themselves threatened in primaries, treated as traitors to the Republican Party. And some of them would probably lose.

Let’s say that these Republicans were even willing to go a step further. Let’s say they believed Trump was destroying the Republican Party as they knew it, and it was time to let the party die and start a new party in its place.

The Republican Party would then split. How would this play out?

For sake of simplicity, let’s say half of today’s Republican voters would stick with the Trump Republican Party, while the other half move over to the new Conservative Party (which would stand for more traditional conservative values of restraint and limited government).

So assuming a 50-50 electorate right now, we’d instead now have a 50-25-25 electorate (Democrat-Republican-Conservative).  . . . . The result? Democrats would win a landslide in the House, easily taking 300 seats. They’d also probably win a bunch of Senate seats too.

That’s how our single-member, plurality electoral system works. And it’s why Republicans would never do this — because they could anticipate exactly what would happen. If the Republican Party splits over Trump, Democrats win.

You can quibble with my guesstimates of percentages and breakdowns here. . . . But even if it only happens in a handful of districts, even if only a limited number of Republicans break off to stand against Trump, they could tip control to Democrats.

Because we have single-member plurality-winner districts, Republican leaders who formed a third party to support conservative policies but oppose Trump would be handing congressional elections to Democrats.

In the two-party system, Republicans in Congress need Trump as much as he needs them. As a result, Republicans, whether or not they think Trump is a narcissistic, amoral pathological liar, are stuck with him. So are voters who want conservatism without Trump.

Going forward, this trap will only make politics more ugly.

For Republicans, the challenge will be to keep their troops feeling certain that however imperfect Trump might be, Democrats would by definition be worse — that it really might be the end of the republic if Republicans lose the house. This likely means doubling down on all the aggressive us-against-them white Christian identity politics and apocalyptic narratives they can find to make sure their base shows up.