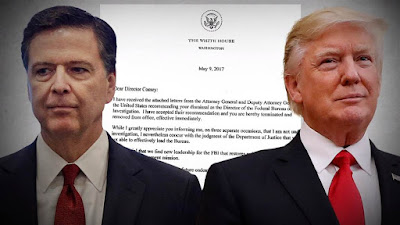 Today Daniel Coats refused to answer questions posed to him by Senators concerning possible requests or directives from Der Trumpenführer that he squelch the FBI  investigation of Trump BFF Michael Flynn.  The ruse for refusing to answer was that it was a public session and, therefore, Coats and others talked about their "feelings" and seemingly gave the various Senators the finger.  Ditto for Deputy Attorney General Rod Rosenstein who either (i) doesn't appreciate the seriousness of where the nation finds itself - he wasn't even 10 years old when Watergate unfolded- or (ii) has become complicit in the Trump obstruction of justice effort.   Meanwhile, many Vichy Republicans, many of whom were adults during the Watergate scandal and at the time of Richard Nixon's resignation from the presidency, continue to close their eyes to the many sins and seemingly illegal acts of  Der Trumpenführer.   A column in the Washington Post by one of the Watergate prosecutors argues that James Comey's prepared statement released today provides sufficient evidence to launch an obstruction of justice case against Trump (and by extension his accomplices).  Here are are column excerpts:

In prepared testimony released on the eve of his appearance Thursday before the Senate Intelligence Committee, former FBI director James B. Comey placed President Trump in the gunsights of a federal criminal investigation, laying out evidence sufficient for a case of obstruction of justice.

Comey proved what Director of National Intelligence Daniel Coats and National Security Agency Director Michael S. Rogers carefully avoided admitting in their testimony on Wednesday— that the president had specifically attempted to shut off at least a major piece of what Trump calls the “Russia thing,” the investigation into the misleading statements by fired national security adviser Michael Flynn concerning his role in dealings with the Russians. This kind of presidential intervention in a pending criminal investigation has not been seen, to my knowledge, since the days of Richard Nixon and Watergate.

Comey’s statement meticulously detailed a series of interventions by Trump soliciting his assistance in getting the criminal probe dropped. These details are red meat for a prosecutor. Presumably, the team of experienced criminal prosecutors that special counsel Robert S. Mueller III has assembled will be following up on this crucial testimony, which rests on contemporaneous memorandums that Comey was sufficiently alarmed to prepare immediately after receiving the president’s requests.
That both Coats and Rogers denied that they “felt pressured” provides no comfort for the president’s position. The obstruction of justice statute prohibits not only successful interference with pending criminal investigations but also any use of “threats” to “endeavor” to obstruct an investigation. Thus, it is the attempt or objective that is criminal, and Coats and Rogers were apparently unable to deny that the president had solicited their interference in the pending FBI investigation. If Coats and Rogers did not yield to the endeavor, kudos for them, but that is no excuse for the president.
Moreover, Comey’s testimony also supplies the element of “threats.” . . . The president asked Comey whether he liked his job and wanted to continue in it, . . . . Leaving little doubt about the price of continued retention, the president twice, according to Comey, told him that he expected “loyalty” from Comey, just as he did from everyone else around him.
Then, on Feb. 14, the president carefully structured another one-on-one meeting with Comey, specifically ordering Attorney General Jeff Sessions, to whom the FBI director ordinarily reports, to leave the Oval Office where Comey, Sessions and other national security officials (and Jared Kushner) had been meeting. At that point, the president laid his cards on the table, according to Comey: “I hope you can see your way clear to letting this go, to letting Flynn go. He is a good guy. I hope you can let this go.”

Next, in phone calls on March 30 and April 11, the president solicited Comey’s help in removing the “cloud” over Trump resulting from the FBI investigation into Russian interference in the 2016 election and possible Trump campaign collusion. . . . . The president dropped the other shoe on May 9, summarily firing Comey.

He brazenly stated that he fired Comey in order to bring the “Russia thing” to a close, and he bragged to senior Russian officials in a private Oval Office meeting that this is what he thought that he had accomplished by sacking Comey.

Comey’s statement lays out a case against the president that consists of a tidy pattern, beginning with the demand for loyalty, the threat to terminate Comey’s job, the repeated requests to turn off the investigation into Flynn and the final infliction of career punishment for failing to succumb to the president’s requests, all followed by the president’s own concession about his motive. Any experienced prosecutor would see these facts as establishing a prima facie case of obstruction of justice.

The ball now is in Mueller’s court to decide whether he has (or will have) enough evidence to charge Trump with obstruction and, if so, whether to reach the same conclusion that I reached in the Nixon investigation — that, like everyone else in our system, a president is accountable for committing a federal crime.

The author if the column?  Philip Allen Lacovara, a former U.S. deputy solicitor general in the Justice Department, who served as counsel to Watergate special prosecutors Archibald Cox and Leon Jaworski.  I find Lacovara more believable than Trump apologists and Vichy Republicans.
Posted by Michael-in-Norfolk at Thursday, June 08, 2017