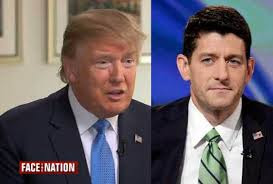 While I feel despair at times over the damage being done to the country by the Trump/Pence regime and Vichy Republicans, I also take some cynical glee in watching many Republicans twisting on a rope of their own creation as they pander to Trump voters in the party base in order to avoid primary challenges while at the same time alienating moderate and many swing voters.  The entire process started when Christofascists and thinly veiled white supremacists were voted on to local city and county committees with the foolish idea that moderates could control these toxic individuals and the agendas they pushed.   Instead, the deplorable hijacked the party grass roots and sane and rational people fled the GOP in droves, I and my entire extended family included.  A piece in The Atlantic looks at the Republican self-created dilemma.  Here are excerpts:

CARTERSVILLE, Ga.—Several miles off Route 41 in Bartow County, Georgia, is the downtown area of Cartersville. It's a throwback place with brick-face storefronts, independently owned businesses, and railroad tracks that bring freight trains straight through the center of the town every 30 minutes.

Here, the firing of James Comey arouses not support or opposition, but rather, indifference. Nobody I spoke with cared either way; it doesn't affect them or their families. People shrugged when asked about Trump's tweetstorms. Most agreed that press treatment of Trump is too harsh. Overall, the focus for Trump voters here is the big picture: the economy, jobs, and border security.

Bartow County is 885 miles from Manhattan, but this is Donald Trump country. He took 46 percent of the vote here during the primary, trailed by Ted Cruz at 25 percent and Marco Rubio at 18 percent. In the general election, Trump trounced Hillary Clinton, winning 75 percent of the vote to Clinton's 21 percent.

Currently, however, President Trump’s job approval is clinging to the 40 percent threshold. And while Republican members of Congress, save for a select few, are backing the president, his legislative agenda appears stalled, with the prospects of health-care reform tenuous at best. Tax reform, at this point, looks like a pipe dream.

Trump's struggles have left Republicans, who had once hoped to gain seats in 2018, worrying they might lose control of both the House and Senate. "Obviously no one knows what is going to happen in next year's midterm elections, but analysts who have watched congressional elections for a long time are seeing signs that 2018 could be a wave election that flips control of the House to Democrats,” Charlie Cook wrote recently in National Journal.

Trump keeps adding gasoline to fires, yet House Speaker Paul Ryan and Senate Majority Leader Mitch McConnell behave as if it’s business-as-usual in Washington, D.C. If there is anything to explain their reticence in publicly rebuking Trump, it likely comes from GOP fears of alienating Trump voters across the country.

This is the predicament now facing conservatives and Republicans in Congress. Trump’s supporters—their own primary voters—are standing by him. But while Trump supporters want him to focus on the big picture issues such as health care and tax reform, the president spends most of his time consumed with the kind of trivialities other presidents leave for spokespeople to handle.

At this point, it does not appear that anybody in the White House can communicate to Trump the urgency to dial down the tweetstorms and outbursts. (Kellyanne Conway defended Trump’s tweeting as going “directly to the people.”)

That leaves leaders like Paul Ryan and Mitch McConnell in a bind. They worry about Trump alienating the swing voters some of their members will need to win reelection but if they make their concerns public, Trump supporters may see it as an attempt to undermine the president. In March, Trump threatened lawmakers who didn't back the AHCA with a primary opponent. Many Republicans represent districts that went strongly for Donald Trump in 2016, and while they hold safe seats for the general election, none of them want to waste time and resources beating back primary opponents.

Much as Trump voters may detest insiders, the president’s ability to enact his agenda now rests on Ryan and McConnell. They’re left to perform a high-wire act of politics and personal persuasion, trying to rein in their president’s excesses without alienating their own voters. If they can’t pull it off, voters in places like Cartersville are likely to be unforgiving. Couple that with a resurgent Democratic electorate, and the wave election Charlie Cook warned about comes closer every day.

We can only hope that the Republicans' worst nightmares are realized in 2018.