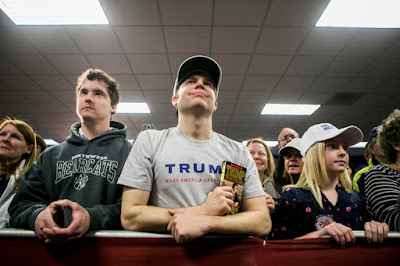 An op-ed in the New York Times entitled "Why Rural America Voted for Trump," offered yet another attempt to argue that those rural Americans who voted for Trump were not motivated by "ignorance, racism, sexism, nationalism, Islamophobia," or other such things. The piece tries to argue that voting for a vile, pathological liar who campaigned on hate and bigotry was merely based on rural Americans having a different philosophy.  Sorry, but my read of the article, indicates that Trump voters' motivation boils down to basically two things: (i) the rural embrace of religious inspired ignorance (and racism) and the rejection of knowledge and new ideas, and (ii) rural citizens' resentment of others who live different life styles and having, unlike themselves, refused to engage in the equivalent a self-administered lobotomy.  And FYI, I am not some "urban elitist" since, truth be told I grew up in the country through my high school years and attended a very small rural high school.  I am not anti-rural living. I'm just opposed closed mindedness, bigotry, religious extremism and sanctimonious hatred towards others.  One aspect of the piece struck me as well:

To make matters worse, jobs are continuing to move to metropolitan areas. Small-town chamber of commerce directors and mayors still have big dreams, and use their perkiest grins and tax abatements to try to lure new businesses, only to see their hopes dashed, time and again. Many towns with a rich history and strong community pride are already dead; their citizens just don’t know it yet.

Ironically, at least in the case of many towns and very small cities in Southwest Virginia, the reason no one wants to relocate their business to the region is the residents' closed mindedness, bigotry, religious extremism and sanctimonious hatred towards others, especially LGBT individuals and racial minorities.

A heated piece in Rude Pundit takes apart the pomposity of the Times op-ed and the rural Trump voters.  Here are excerpts:

And all I could think when I read it was "Fuck you, you elitist fucking assholes. Why is your judgmental ass more valid than mine?"We're all supposed to nod our heads and respect these shitheels while they mock liberals and are ennobled by the rank nonsense of those who desperately want to justify the racism, etc. because otherwise they have to admit that they are surrounded by horrible, hateful fucks. But I won't do that precisely because I have more respect for these dumbass motherfuckers than any of the wannabe Jane Goodalls observing the ways of the chimps. How do I have more respect? Because I don't treat them like fucking children or a hidden Amazon tribe whose language is clicks and trills. We're talking about fucking grown-ups who make fucking grown-up decisions, and I'm gonna treat them like grown-ups. And their attitudes towards urban Americans are no less elitist than the dumbass motherfuckers on the coasts who lump everyone else into flyover country.Here's the deal. There are a whole bunch of us city liberals who came from rural or southern or whatever areas. I've told this story a hundred goddamn times, but this pinheaded, Ivory Tower-humping leftist lived in a trailer park in Florida with a trucker father and a working mom. At 13, I started working unloading semis at warehouses after school. My family was on welfare, including food stamps, and when my father died, we were on Social Security to survive in the south, and we worked our asses off to get out of that hole. I know a shit-ton of other people who have a similar M.O. and now live in New York or L.A.  and a shit-ton who continue to live in rural areas. So don't fucking preach to me about the goodness and grace of conservative rural people or the white working class.

And as for those good hard-workin' young men who love God and country? More than a few of 'em were hanging out in the gay bars of south Louisiana, far from New Orleans, trying to get their dicks sucked in the men's room. I guarantee you that Leonard's liberal-hating boys or ones like them are hoping for a little sinful time with another man.

It's all bullshit. . . . . the reason why liberals are called "elitist." We actually know that most of our taxes go to the Republican-run states. We aren't fucking hypocrites who condemn government, elect people who want to shrink government, and then are pissed off when the government doesn't offer enough services. We don't get our news from conspiracy theorists and liars. Are there excesses on the left? Of course. We're fuckin' human. But when one group is inclusive of all races and religions and genders and sexual orientations and more, while the other pines for a time when white Christians ran everything, it's pretty damn clear who the real elitists are.

What you're calling "elitism" is just simply not being ignorant. We don't have our heads shoved up Jesus's ass. And when the left gets angry because of how fucking dumb some of the shit coming out of rural and red mouths is, we're told we need to understand what they believe. No, we're just gonna say that stupid is stupid.

[D]espite every fucking word to the contrary, the real problem is that those who voted for Trump are racist. They are sexist. They are Islamophobic. They are ignorant.

The whole thrust of these "let's learn about the yokels" articles is to imply that there are real Americans and there are coastal elites. Sorry, motherfuckers. We're all Americans. And if I have to suffer under your stupid, you have to hear about our smarts.

Well said, albeit "colorfully."
Posted by Michael-in-Norfolk at Saturday, January 07, 2017