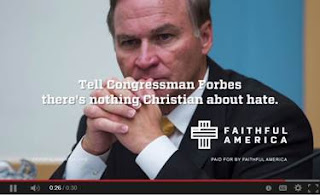 As noted in prior posts, I urged voters to vote against Randy Forbes - a former law school classmate - and then celebrated his primary loss to Scott Taylor.  Forbes' principal "contributions" in Congress were Christofascist backed batshitery.  Americans for the Separation of Church and State has a rundown of the lunacy and in some cases arguably unconstitutional measures that always received Forbes' support.  Here are some highlights:

A staunch Religious Right ally will soon be leaving Congress after he suffered a primary defeat on Tuesday.

After 15 years in office, U.S. Rep. Randy Forbes (R-Va.) was defeated 53 percent to 41 percent by a Republican challenger despite outspending his opponent almost 10-1. Forbes is partly the victim of redistricting; he switched to a new district this year after the makeup of his old one changed in favor of Democrats.

We won’t exactly be sorry to see Forbes go. While in office, he regularly did the Religious Right’s bidding.

In 2009, Forbes backed a resolution that outlined “73 milestones of spirituality and faith in the United States.” The measure also recognized what he claimed were “the religious foundations of faith” that “form the inseparable foundation for America’s representative processes, legal systems and societal structures.”

At Ralph Reed’s Faith and Freedom Conference in Washington, D.C., in 2010 Forbes peddled bad history. He claimed America was intended to be an officially “Christian nation” as evidenced by instances when our government eroded the church-state wall, including the U.S. Supreme Court’s 1892 decision in Holy Trinity v. United States. Of course he failed to mention that the Holy Trinity decision is a legal anomaly. It has rarely been cited by other courts, and the “Christian nation” declaration made in the opinion for that case appeared in dicta, which is a legal term meaning writing that reflects a judge’s personal opinion, not a mandate of the law.

In 2011, Forbes sponsored a resolution that reaffirmed “In God We Trust” as the official motto of the United States and encouraged its display in public spaces.

Forbes is also heavily involved with the Congressional Prayer Caucus.

It’s no wonder, then, that Forbes was endorsed by the anti-gay Family Research Council (FRC) right before his defeat.

Meanwhile, state Del. Scott Taylor (R-Virginia Beach) will face Democrat Shaun Brown, a businesswoman who has not previously held elected office, in the November election. We don’t know what the outcome of that race will be, but the winner would have to work really hard to top Forbes’ record on mixing church and state.