The GOP Hates Extremism Except When Endorsing It 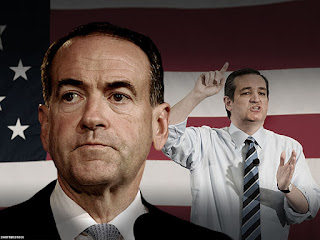 With the Republicans whining and shrieking about the dangers of religious extremists (of the Muslim type, of course) in the wake of the Paris attacks, they are conveniently blind to the ugly extremism that permeates much of the GOP base.  In the GOP play book, it is perfectly fine for "conservative Christians" to advocate the murder and execution of gays - just like ISIS, by the way - and somehow there is nothing extremist about it.  Indeed, as we saw Mike Huckabee, Ted Cruz, and Bobby Jindal all attended a gathering where the execution of gays was repeatedly supported.  Yes, all feign ignorance about the event, even though all received demands that they cancel their appearances because of the extremist position of event organizers (in short, they lied).  Candidly, it is hard for Republicans to credible on the issue of religious extremism when it is now the GOP's stock in trade - along with racism and sexism.  A piece in The Advocate looks at the GOP's hypocrisy.  Here are highlights:

Unless you watch Rachel Maddow’s MSNBC show, you probably aren’t aware of the fact that Republican presidential candidates Mike Huckabee, Ted Cruz, and Bobby Jindal (the latter dropped out of the race on Tuesday) all recently attended a “religious freedom” rally in Iowa hosted by antigay preacher Kevin Swanson, who has repeatedly called for the execution of homosexuals. Unlike the Duggar-styled martyr-complex performance art of Kim Davis, Swanson’s brand of bigotry is overtly bloodthirsty, with rhetoric echoing hateful pastor Scott Lively, a central figure in the persecution of LGBT Ugandans and part of the impetus for their proposed “kill the gays” legislation.

On her show, Maddow showed extensive clips from Swanson, and characterized the event as “a ‘kill-the-gays’ call to arms,” but the rest of the media has by and large ignored the scandal. Huff Po’s Michelangelo Signorile recently noted that The New York Times, The Washington Post and the majority of mainstream outlets either ignored the comments altogether, or focused their attention on the conferences derision of atheists or the Swanson’s outlandish claim that drowning children is preferable to letting them read Harry Potter, and suggested that the media’s tacit acceptance of this rally “suggest we’ve not come as far on LGBT rights as we all like to tell ourselves.”

I believe journalists have a responsibility to report on a group of political candidates’ casual acceptance of murder. Where exactly is the line between a declaration of your backwards belief and an incitement of violence? If the only weapon we have to limit this kind of speech is the court of public opinion, why are journalists allowing Swanson and his political companies to exist in a vacuum?

In a recent interview with Fox and Friends, Cruz stated that the “enemy is radical Islamic terrorism. As long as we have a Commander-in-Chief unwilling to even utter the words radical Islamic terrorism we will not have a concerted effort to defeat these radicals before they murder more and more innocents,” insinuating that the war was not in fact with ISIS, but with an extremist religion. While Cruz may not consider LGBT people ‘innocents,’ it’s still hard to reconcile his affiliation with Swanson with his condemnation of extremism. If your deeply held religious belief is that gay people should be put to death, then you are, categorically, an extremist.

What, exactly, separates Kevin Swanson from the ISIS leaders calling for the execution of homosexuals?

It seems particularly ironic that the political candidates who are most vocal about barring Syrian refugees from entering this country out of fear of “radical Islam” are fervent advocates of turning this country into a radical Christian theocracy that subjugates women, gays, transgender people and anyone that falls outside of their definition of morality.

[W]e’re going to see more and more opportunist bigots like Huckabee, Cruz, and Jindal taking advantage of it, and laughing all the way to the bank. If the media won’t speak out on our behalf, we have a responsibility to speak out against the media for enabling this kind of bigotry.

Posted by Michael-in-Norfolk at Thursday, November 19, 2015