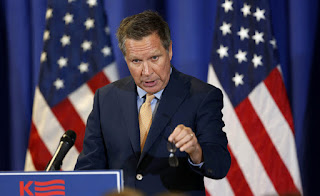 Driving home I heard John Kasich being interviewed and the topic of defeating ISIS and Islamic extremism came up.  In addition to advocating "boots on the ground" (and then evasively  dancing around naming the number of American lives he'd throw away), Kasich shockingly indicated that he would establish a propaganda department to spread "Judeo-Christian values" to win the war of ideas against ISIS.  That statement along proves to my mind that Kasich is unfit for the White House.  If one looks at history, it is the values and ideas of The Enlightenment that moved mankind forward and which are the real basis of modern Western civilization.  Religion and Christianity in particular have a bloody track record of giving the world, hate, bigotry and the murder of those with differing beliefs.  Be it the annihilation of other Christian sects during the early years of Christianity, the Crusades, Europe's wars of religion, the extermination of native peoples in the Americas, Judeo-Christian values have proven deadly.  The Washington Post looks at Kasich's ridiculous proposal.  Here are article highlights:

During a speech Tuesday at the National Press Club, Ohio Governor and Republican presidential candidate John Kasich offered a litany of ideas meant to broaden the influence of the United States and combat the rise of the Islamic State. Among them was one that, on its face, seemed to contradict the 1st Amendment to the Constitution.

U.S. public diplomacy and international broadcasting have lost their focus on the case for Western values and ideals and effectively countering our opponents' propaganda and disinformation. I will consolidate them into a new agency that has a clear mandate to promote the core, Judeo-Christian Western values that we and our friends and allies share: the values of human rights, the values of democracy, freedom of speech, freedom of religion and freedom of association."

"The 'Judeo-Christian' phrase, my sense is, is an unfortunate phrase by the governor," Neuborne said. "What he really means is historically the values associated with Western culture.

A President Kasich, though, "couldn't create an agency designed to promote strictly religious values," Neuborne said. "To the extent he's insisting in making it a religious institution, he's making it harder on himself. But my bet is that's not what he intended."

Apparently, Kasich failed to notice that Bobby Jindal's self-prostitution to the Christofascists did not save his campaign.  And, as noted above, he is apparently so ignorant of history that he doesn't understand that it was The Enlightenment - which embraced knowledge and reason and rejected religious based ignorance and bigotry - that is the basis of what we now consider to be western values. Sadly, the author of the Post piece is seemingly as ignorant as Kasich on this point.

Posted by Michael-in-Norfolk at Tuesday, November 17, 2015