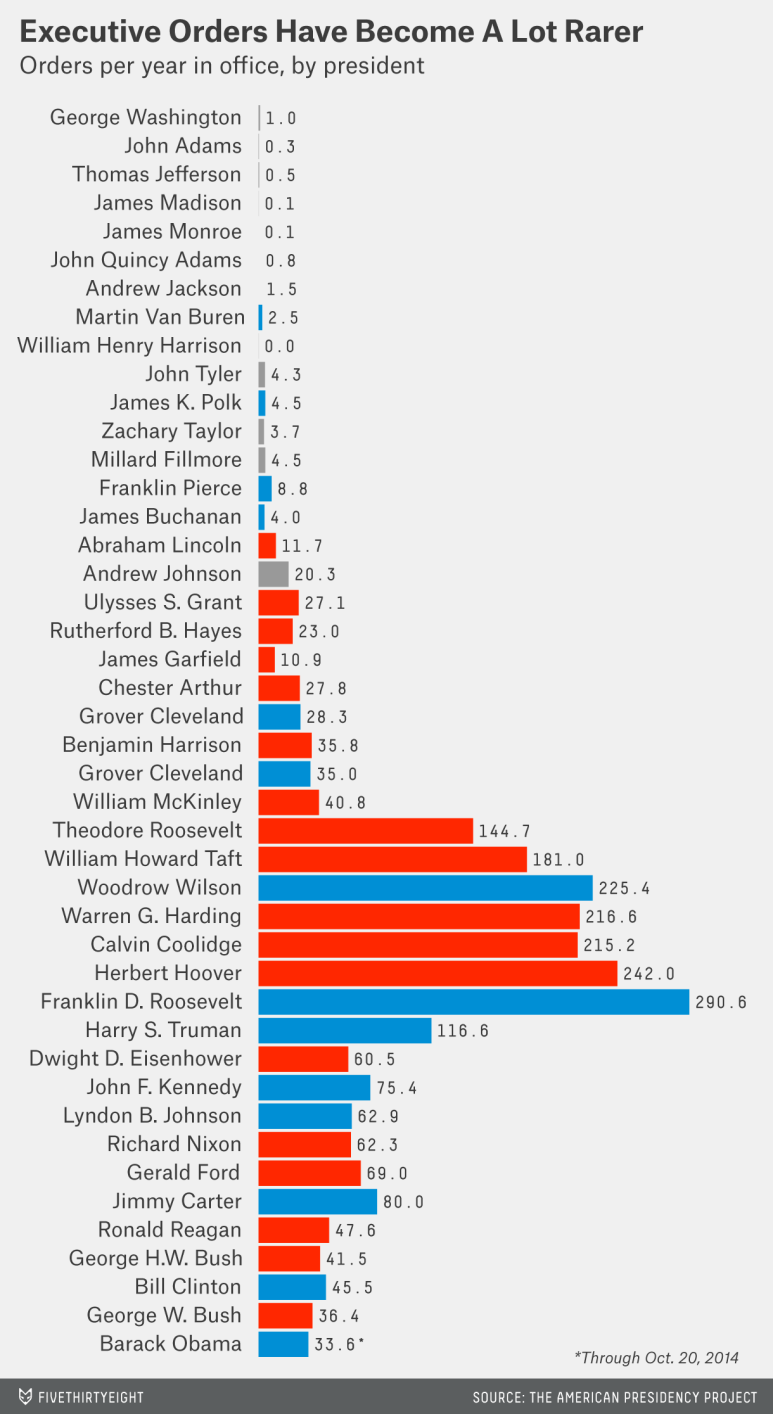 The Congressional Republicans, in slavish whore like obedience to the racists in the GOP base who hold open hatred for (i) Barack Obama because of his skin color and (ii) Hispanics  - and other racial minorities - , continue to threaten Obama with impeachment (even though there would be too few votes in the Senate to prevail), government shutdowns, law suits, and other spittle flecked reactions.  The irony is that among the GOP complaints is that Obama has indulged in excessive use of executive orders.  The chart above shows the lie to this claim with Obama having to date signed fewer executive orders than Chimperator George W. Bush, and every Republican President since Chester A. Arthur (who left the White House on March 4, 1885).  Sadly, with the rise of the Christofascists in the GOP truth and honesty went out the window.  Now, if a Republican member of Congress lips are moving, like the "godly Christian" crowd the safest assumption is that he/she is lying.

A piece in the Virginian Pilot looks at the reality of where the GOP finds itself in terms of stopping President Obama's executive order on immigration.  It is noteworthy that a MAJORITY of Americans want immigration reform.  It's principally the racist GOP party base that opposes immigration reform.  I just wish that news outlets would call a spade a spade and stop using the term "conservatives" as a smoke screen for the racists in the GOP base.  Here are article highlights:

President Barack Obama has the upper hand in the fierce struggle over immigration now taking shape, with a veto pen ready to kill any Republican move to reverse his executive order, Democrats united behind him and GOP congressional leaders desperate to squelch talk of a government shutdown or even impeachment.

With the public favoring changes in the current immigration system, the Republicans' best short-term response appears to be purely rhetorical: that the president is granting amnesty to millions, and exceeding hisconstitutional authority in the process.   Beyond that, their hopes of reversing his policies appear to be either a years-long lawsuit or the 2016 presidential election.

Neither of those is likely to satisfy the tea party adherents in Congress - or the Republican presidential contenders vying for support among party activists who will play an outsized role in early primaries and caucuses just over a year away.

"We alone, I say it openly, we the Senate are waiting in our duty to stop this lawless administration and its unconstitutional amnesty," said one of them, Sen. Ted Cruz of Texas. In remarks on the Senate floor, according to his office, he was channeling Cicero, the ancient Roman orator.  In a portion of the oration that Cruz did not mention, Cicero referred to a Roman Senate decree calling for a conspirator against the Roman republic "to be put to death this instant."

More than 2,000 years later, impeachment in the House and a trial in the Senate stand as the sole established remedy against high crimes and misdemeanors by any president.

House Speaker John Boehner and Senate leader Mitch McConnell want none of that. Nor are they interested in provoking a government shutdown as a way to block spending needed to carry out Obama's order, viewing that as a poor way to embark on a new era of Republican control of Congress.

The political debate is well underway, although the two parties seem to be appealing to different segments of the electorate. Polls show that the country as a whole and especially Hispanics favor allowing immigrants to remain in the country and work even if here illegally. Conservatives tend to prefer deportation.

"The critics are going to call it amnesty," Sen. Dick Durbin, D-Ill., predicted correctly on Thursday in advance of Obama's speech. "But as Sen. Rubio has reminded us, doing nothing - leaving the current system in place - is amnesty."


Obama's order didn't go that far. It calls for suspending the threat of deportation for millions, but without the promise of a green card that bestows permanent legal status, much less citizenship.

I continue to be ashamed that I was ever a Republican.  I take honesty and integrity seriously - these are lost concepts in today's GOP.
Posted by Michael-in-Norfolk at Saturday, November 22, 2014