Gay Marriage: The Tide Has Turned, But Is the Supreme Court Listen? 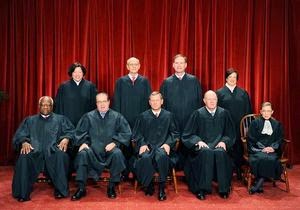 With the constitutionality of gay marriage bans headed back to the U.S. Supreme Court in the wake of the 6th Circuit Court of Appeals incredibly wrong ruling - based, as previously noted on arguments made by a white supremacy group - some believe that the outcome will inevitably be than same sex marriage becomes legal nationwide, Given the fact that the Court turned down appeals from Virginia and other states and gave de facto affirmation of the Court of Appeals rulings, such reasoning is easy to understand.  Yet there remain far right extremists on the Court who would not hesitate to role back the advance of marriage equality.  A post in the Huffington Post looks at the issue and whether or not a majority on the Court realize that any attempt to reverse the tide will go against public opinion.  Here are highlights:

The Supreme Court may soon be pushed, however reluctantly, to address the question of whether there's a constitutional right to same-sex marriage. So far, it has punted on the issue. But last week, gay and lesbian couples filed petitions asking the court to rule on the matter now that federal appeals courts have issued contradictory decisions. They hope the court will hear their case before the current session ends in June.

On October 6, the Supreme Court rejected petitions seeking to appeal lower court rulings that struck down bans on same-sex marriage in Wisconsin, Utah, Indiana, Oklahoma, and Virginia. As a result, same-sex marriage is now legal in 33 states as well as the District of Columbia.

At the time, the various federal appeals courts saw the issue the same way, knocking down many state bans on gay marriage. But on November 6, the Court of Appeals for the Sixth Circuit, based in Cincinnati, upheld state bans on same-sex marriage in Ohio, Tennessee, Michigan and Kentucky.

Splits among circuit courts are one of the factors that the Supreme Court considers before taking on a case. Now that different appeals courts have disagreed on the constitutionality of same sex marriage, the Supreme Court may have a hard time avoiding a direct showdown on the issue.

So far, the Supreme Court has been much more cautious about same-sex marriage than it was about inter-racial marriage a half-century ago. . . . They stopped short of proclaiming same-sex marriage a basic right. They left it to the states to determine whether gay Americans have the same right to marry as their straight counterparts.

Compare this to the Supreme Court's bold 1967 ruling in Loving v. Virginia, which knocked down state anti-miscegenation laws. At the time, "states' rights" was the justification used by Southern racists to defend Jim Crow laws, including school segregation, racial discrimination in restaurants and buses, severe limits on voting by African Americans, and bans on interracial marriage. Back then, the Supreme Court was ahead of public opinion regarding interracial marriage. Now it is behind public opinion when it comes to same-sex marriage. It is hard to see how the legal case for same-sex marriage is any different, but the Supreme Court chose to advocate states' rights over equal rights.

Although no one can be sure whether or how the Supreme Court justices will decide, the American public has already made up its mind. Public support for gay marriage has hit a new high. According to a Washington Post/ABC News poll, conducted in June this year, 56 percent of Americans believe it should be legal for gay and lesbian couples to marry . . .

Moreover, support for gay marriage is much higher among younger Americans, indicating that the future belongs to the advocates, not the opponents, of same-sex marriage. Soon, conservative politicians and groups will no longer be able to use gay marriage as a "wedge" issue to stir controversy and win elections. The days of gay-bashing as a political strategy are numbered.

[W]hen the U.S. Supreme Court, in Loving v. Virginia, knocked down state anti-miscegenation laws everywhere, 16 states still had such laws on the books and 72 percent of the public still opposed interracial marriages.

Warren penned the opinion for the court, noting that the Virginia law endorsed the doctrine of white supremacy. He wrote:

Marriage is one of the 'basic civil rights of man,' fundamental to our very existence and survival.. . . To deny this fundamental freedom on so unsupportable a basis as the racial classifications embodied in these statutes, classifications so directly subversive of the principle of equality at the heart of the Fourteenth Amendment, is surely to deprive all the State's citizens of liberty without due process of law. The Fourteenth Amendment requires that the freedom of choice to marry not be restricted by invidious racial discrimination. Under our Constitution, the freedom to marry, or not marry, a person of another race resides with the individual and cannot be infringed by the State.

Reread Chief Justice Warren's words. Then substitute same-sex marriage for interracial marriage and see if his views are any less compelling. Most Americans would now agree that to deny gays and lesbians the right to marry is, as Warren put it,"directly subversive of the principle of equality at the heart of the Fourteenth Amendment." Today's version of anti-miscegenation laws are those that prohibit same-sex marriage.

Posted by Michael-in-Norfolk at Wednesday, November 19, 2014