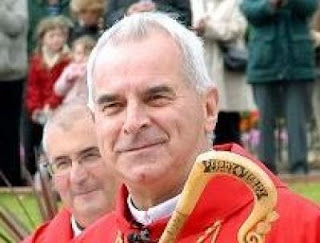 Over the weekend this blog noted the exploding gay sex scandal surrounding UK Cardinal Keith O'Brien who has been an outspoken opponent to LGBT rights in general and gay marriage in particular.  While O'Brien had said he would contest the allegations made by four different priests - most of the claimed sexual advances occurred when the priest were seminarians or newly ordained - there must have been fire and not just smoke in the allegations because reportedly in a final act Pope Benedict XVI forced O'Brien's resignation.  As one might expect, perennial Catholic Church apologist William Donohue is apoplectic that the "Lavender Mafia" successfully took down a cardinal.   Despite Donohue's protestations that O'Brien should be deemed innocent until proven guilty, Benedict XVI in a rare display of decisive punishment for sexual impropriety felt forced to act.  Apparently, covering up countless crimes against children and youths is fine with Benedict XVI, but accusations of actually participating in gay sexual activities is too much for the the bitter old queen.  First these highlights from The Guardian:

The pope has forced the abrupt resignation of Britain's most senior Roman Catholic as the church made a frantic attempt to minimise the impact of allegations of "inappropriate acts" committed by Cardinal Keith O'Brien against fellow priests.

O'Brien stood down as archbishop of St Andrews and Edinburgh the day after the Observer published accusations by three serving priests and a former priest about his conduct towards them during the 1980s.

He issued a statement in which he ambiguously apologised for "any failures" and to those he had "offended", and announced that he would no longer travel to the Vatican to help select a successor to Pope Benedict XVI, who retires at 8pm on Thursday. O'Brien had been due to be the only British cardinal with a vote.

The cardinal revealed in his statement that he had been asked by the outgoing pope to stand down immediately. Already due to retire next month, the cardinal stated: "The Holy Father has now decided that my resignation will take effect today."

Senior Catholics said his resignation was intended to stop the allegations turning into a crisis. The church is already under pressure over unrelated abuse and corruption scandals in other dioceses.
Professor John Haldane, one of Scotland's senior Catholic theologians and an adviser to the Vatican, said O'Brien's decision was "shocking and sad" but, given the timing of the allegations and the "inevitable" media interest, it was not a surprise.

[T]the move led critics to demand that other cardinals at the centre of scandals over failures to report sex abuse by priests – including Roger Mahony, emeritus archbishop of Los Angeles, and Seán Brady, the primate of all Ireland – "recuse" themselves from the papal conclave, citing O'Brien's decision as a precedent.

In his statement on Monday, O'Brien implied he had been told to resign immediately, stating: "The Holy Father has now decided that my resignation will take effect today, 25 February 2013, and that he will appoint an apostolic administrator to govern the archdiocese in my place until my successor as archbishop is appointed."

Insiders said O'Brien's abrupt departure had left the Scottish Catholic church, which he had led for 10 years, disoriented and shocked. One source said it meant that only three out of eight Scottish dioceses now have full-time, permanent bishops in charge.

I suspect that many others within the ranks of the Church's cardinals and bishops have behaved no differently than O'Brien.  Meanwhile, here's what the always incensed  Donohue is spouting:

We don’t know the names of the four men making the accusations because the British newspaper behind this story, The Observer, won’t release them; the details of what allegedly happened have not been disclosed (all we know are vague statements about “inappropriate” and “unwanted” contact); the four accusers waited over 30 years to come forward before coordinating their joint charges.

Cardinal Keith O’Brien must be considered innocent until proven guilty. But we don’t need to wait any longer to conclude that the British media have discredited themselves again (they do so regularly with all matters Catholic). To withhold the names of the accusers, and the details of what allegedly happened (dating back to 1980), without ever allowing the accused to rebut the charges, is despicable. Am I alone in picking up the scent of lavender in the air?

Posted by Michael-in-Norfolk at Monday, February 25, 2013