I noted in a post yesterday how Texas GOP U.S. Senator Ted Cruz (pictured above) seems to want to reprise the Joseph McCarthy era of the 1950's by brandishing about claims that people who disagree with his far right extremist views are communists.  A piece in the New Yorker looked at Cruz's unfounded allegations.  Now, in a follow up article The New Yorker is reporting that Cruz's office has said that his labeling of Harvard professors and others as communists is true.  Of course, his claims are false, but what else can one expect from today's Republican party.  It's the same mindset that labels women who use contraception as sluts and whores.  Here are excerpts from the latest New Yorker story:

Senator Ted Cruz has responded to The New Yorker’s report that he accused Harvard Law School of having had “twelve” Communists who “believed in the overthrow of the U.S. Government” on its faculty when he attended in the early nineties. Cruz doesn’t deny that he said this; instead, through his spokesman, he says he was right: Harvard Law was full of Communists.


His spokeswoman Catherine Frazier told The Blaze website that the “substantive point” in Cruz’s charge, made in a speech in 2010, was “was absolutely correct.”

She went on to explain that “the Harvard Law School faculty included numerous self-described proponents of ‘critical legal studies’—a school of thought explicitly derived from Marxism—and they far outnumbered Republicans.” As my story noted, the Critical Legal Studies group consisted of left-leaning professors like Duncan Kennedy, who is a social democrat, not a Communist, and has never “believed in the overthrow of the U.S. Government.”


Cruz’s spokesman called it “curious” that The New Yorker would cover Cruz’s speech “three years” after he gave it. But Cruz’s hostile questioning of Obama’s nominee for Defense Secretary, Chuck Hagel, and insinuations about Hagel’s loyalties had provided a fresh context for looking more closely at the nature of the accusations he has leveled at political opponents. Observers like Senator Barbara Boxer wondered if they were seeing a revival of McCarthyism. Judging from Cruz’s speech—and, now, his defense of it—it’s a good question.


I noted yesterday that Cruz even looks a bit like McCarthy who is pictured below.  Judge for yourselves: 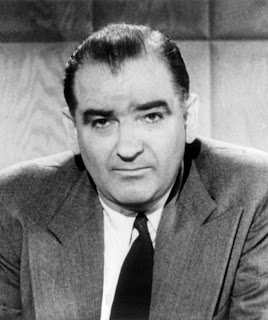 Posted by Michael-in-Norfolk at Sunday, February 24, 2013