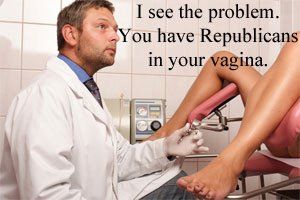 Less there be any doubt that uncrowned GOP gubernatorial candidate is and will continue to be the puppet of religious extremist elements in Virginia - e.g., The Family Foundation and its network of extremists - and nationwide,  a national organization that opposes abortion and contraception will announce tomorrow that it is pledging at least $1.5 million to Cuccinelli's gubernatorial campaign.  Women in Virginia and the men who love and care about them truly need to wake up to the threat Cuccinelli and his Christofascist allies pose to women's rights.  In a post earlier today I looked at what "Biblical marriage" actually looks like and sadly that is precisely the model Cuccinelli and the anti-modernity Christofascist want to enshrine in the laws of Virginia.  The Virginian Pilot looks at the development.  Here are excerpts:

The Susan B. Anthony List, a national organization that opposes abortion, will announce Thursday that it is pledging at least $1.5 million to the Republican gubernatorial campaign of Ken Cuccinelli in Virginia.  "It's an easy call," Marjorie Dannenfelser, president of the Washington-based group, said in an Associated Press interview Wednesday. "This is hands-down the most important election in the country right now."

Cuccinelli, a conservative with a record of advocating abortion restrictions during more than three years as Virginia's attorney general, is unopposed for the GOP nomination at the party's statewide convention in May.  Last year, he forced the State Board of Health to back away from drafting regulations that would have exempted existing Virginia abortion clinics from a new law that subjects the clinics to the same architectural standards as new hospitals.

In a January interview with a conservative Iowa talk show host, Cuccinelli said he recommends civil disobedience to the point of jail time as an effective way for employers to protest a federal mandate to include coverage for contraceptives in their workers' health insurance plans.

"We don't find people like this very often," Dannenfelser said.

Dannenfelser said $1.5 million is just for starters, "an initial budget" to aid Cuccinelli, and that more would be there if he needs it.

The irony is that this anti-abortion, anti-women's rights organization has misappropriated Susan B. Anthony's name.  Anthony was a forceful advocate of women's rights and campaigned tirelessly to win women the right to vote.  What's even more ironic see how the Christofascists have commandeered her name is this via Wikipedia:

As she got older, Anthony continued to move further away from organized religion in general, and she was later chastised by various Christian religious groups for displaying irreligious tendencies. By the 1880s, Anthony had become agnostic.

Even better yet, there is much speculation Anthony was lesbian.  These far right wing nuts are idiots!!
Posted by Michael-in-Norfolk at Wednesday, February 27, 2013