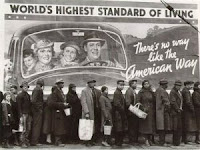 Personally, I am fairly convinced that most of the Republican Party is out to destroy the nation's economy solely for the purpose of trying to block Barack Obama's re-election. Sadly, the damage done to families and workers doesn't appear anywhere on this purely partisan radar screen. Average Americans are purely disposable to this element in the GOP. In addition, there are those in the GOP that put economic ideology over objective reality and similarly threaten the lives and economic well being of many Americans who, unlike the very wealthy so loved bu the GOP, are not in a position to fall back on their wealth and ride out the economic storm. Paul Krugman looks at this bleak picture in a column in the New York Times. Here are some highlights:

Apparently the desperate search of Republicans for someone they can nominate not named Willard M. Romney continues. New polls suggest that in Iowa, at least, we have already passed peak Gingrich. Next up: Representative Ron Paul.

In a way, that makes sense. Mr. Romney isn’t trusted because he’s seen as someone who cynically takes whatever positions he thinks will advance his career — a charge that sticks because it’s true. Mr. Paul, by contrast, has been highly consistent.

Unfortunately, Mr. Paul has maintained his consistency by ignoring reality, clinging to his ideology even as the facts have demonstrated that ideology’s wrongness. And, even more unfortunately, Paulist ideology now dominates a Republican Party that used to know better.

Mr. Paul identifies himself as a believer in “Austrian” economics — a doctrine that it goes without saying rejects John Maynard Keynes but is almost equally vehement in rejecting the ideas of Milton Friedman. For Austrians see “fiat money,” money that is just printed without being backed by gold, as the root of all economic evil, which means that they fiercely oppose the kind of monetary expansion Friedman claimed could have prevented the Great Depression — and which was actually carried out by Ben Bernanke this time around.

[T]here has, indeed, been a huge expansion of the monetary base. After Lehman Brothers fell, the Fed began lending large sums to banks as well as buying a wide range of other assets, in a (successful) attempt to stabilize financial markets, in the process adding large amounts to bank reserves.

Austrians, and for that matter many right-leaning economists, were sure about what would happen as a result: There would be devastating inflation. One popular Austrian commentator who has advised Mr. Paul, Peter Schiff, even warned (on Glenn Beck’s TV show) of the possibility of Zimbabwe-style hyperinflation in the near future.

So here we are, three years later. How’s it going? Inflation has fluctuated, but, at the end of the day, consumer prices have risen just 4.5 percent, meaning an average annual inflation rate of only 1.5 percent. Who could have predicted that printing so much money would cause so little inflation? Well, I could. And did. And so did others who understood the Keynesian economics Mr. Paul reviles. But Mr. Paul’s supporters continue to claim, somehow, that he has been right about everything.

Still, while the original proponents of the doctrine won’t ever admit that they were wrong — my experience is that nobody in the political world ever admits to having been wrong about anything — you might think that having been so completely off-base about something so central to their belief system would have caused the Austrians to lose popularity, even within the G.O.P.

What has happened instead, however, is that hard-money doctrine and paranoia about inflation have taken over the party, even as the predicted inflation keeps failing to materialize.

[I]t’s still very unlikely that Ron Paul will become president. But, as I said, his economic doctrine has, in effect, become the official G.O.P. line, despite having been proved utterly wrong by events. And what will happen if that doctrine actually ends up being put into action? Great Depression, here we come.

I guess it must be the Christianist influence on the GOP that explains this lunacy. After all, who more than the Christianist make ignoring objective reality (and scientific fact) a matter of doctrine and policy?
Posted by Michael-in-Norfolk at Friday, December 16, 2011