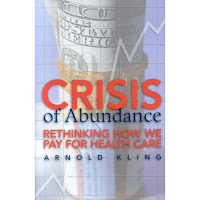 We hear a lot about small businesses being the driving force for job creation. What we do not hear is than many of these small businesses do not provide health care coverage for their employees. Now, with the economy in a free fall many small employers will be pressured to cut health care benefits as they struggle to survive the down turn thereby swelling the number of Americans with no health care coverage. Thus, the national disgrace will be getting worse. The New York Times has a story that chronicles one small business being faced with this hard decision. Here are some highlights:
*
When the bottom fell out of the automotive market last year, Amberly Allen’s fast-growing direct-mail firm hit a wall in a hurry. As orders from car dealerships fell by half, Ms. Allen deferred plans to hire more sales representatives. She put off buying the building she now leases in this Houston suburb. And in November, both she and her husband, one of her four employees, stopped drawing salaries.
*
Still that may not be enough to keep the four-year-old company afloat. Determined not to lay off any of her tight-knit band of workers, Ms. Allen is now agonizing over an equally unappealing option: whether to terminate the health benefits she provides for her employees and herself.
*
Even before the recession, owners of the smallest businesses had struggled to absorb the inexorable annual rise in health premiums. The share of firms with fewer than 10 workers that offer health benefits has declined by 16 percent since 2001, to 49 percent, according to an annual survey by the Kaiser Family Foundation and the Health Research and Educational Trust, while the rate in larger firms essentially stayed flat.
*
The economic downturn has only accelerated the pressure on small-business owners to pinch every penny, and many feel they have few options but to go after employee health coverage. Surveys suggest that rising premiums have prompted more than half of small businesses to reduce benefits, raise deductibles or require workers to shoulder a larger share of an ever more expensive pie.
*
Workers in firms with fewer than 25 workers are now twice as likely to be uninsured as those in larger firms, according to the Employee Benefits Research Institute. For those small-business employees who do have insurance, the share with high deductibles has more than doubled in the last two years.
*
“You can’t cut your rent unless you move, you can’t cut your Internet, you can’t cut your phone — so where do you cut?” Ms. Allen, 28, said. “When you’re not taking a dime out of the company, at some point you have to question whether you’re just working to pay everyone else’s bills.”
*
A number of states have started programs to lighten the health care burden on small businesses through tax credits, pooling mechanisms and insurance regulation. President Obama, in his campaign, called for federal tax credits to encourage small businesses to provide coverage but also threatened to tax “all but the smallest businesses” if they did not contribute to their employees’ health care. Mr. Obama has not yet formally proposed a health plan.
*
The aid cannot come fast enough for businessmen like Mr. Fritts, of the Illinois sporting goods business. He saw his company’s health costs rise 30 percent last year even as its sales plummeted by nearly 60 percent.
*
Republicans may deride "Old Europe," but at least in Old Europe and in Canada citizens are assured some level of health care protection. Here in the USA, unless one becomes destitute, Medicaid provides you with nothing. The state of health care access in this country is a disgrace.
Posted by Michael-in-Norfolk at Tuesday, February 03, 2009