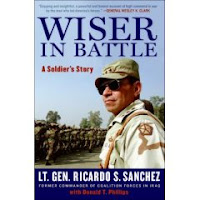 Tell us something that we don't already know! Nonetheless, it is telling that Lt. General Ricardo Sanchez, the former Commander of U.S. forces in Iraq, in a new memoir provides new stark details of the misdoings at high levels of the Chimperator's regime in the first year of the Iraq War. His assessment of the Chimperator's invented war:
*
"Hundreds of billions of taxpayer dollars were unnecessarily spent, and worse yet, too many of our most precious military resource, our American soldiers, were unnecessarily wounded, maimed, and killed as a result. In my mind, this action by the Bush administration amounts to gross incompetence and dereliction of duty."

Exerpts from the book can be found at Time.com. Naturally, Rumsfeld who was one of the master minds of the disaster tried to claim ignorance as shown by this statement:
*
"Mr. Secretary, when V Corps ramped up for the war, our entire focus was at the tactical level. The staff had neither the experience nor training to operate at the strategic level, much less as a joint/combined headquarters. All of CFLCC's generals, whom we called the Dream Team, left the country in a mass exodus. The transfer of authority was totally inadequate, because CENTCOM's focus was only on departing the theater and handing off the mission. There was no focus on postconflict operations. None! In their minds, the war was over and they were leaving. Everybody was executing these orders, and the services knew all about it." Starting to get a little worked up, I paused a moment, and then looked Rumsfeld straight in the eye. "Sir, I cannot believe that you didn't know I was being left in charge in Iraq."

*
One can only hope that some day Bush, Cheney, Rumsfeld and the others that lead the USA into this venture based on lies and false propaganda will be held accountable for the death and destruction that they have wrought on others.