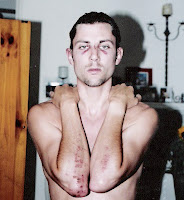 Blogernista has an article on why the Matthew Shepard Hate Crimes law is so badly needed (http://bloggernista.com/) The article describes the brutal gay-bashing of Chris Rico. Chris had to drive himself to the emergency room where he was met with distain from police and emergency technicans. All of this and we have 180 members of Congress including fourteen Democrats who voted against extending the current hate crime law to include LGBT people. Here’s Chris Rico’s description of what happened to him (Chris’ photo is posted above):

I was choking on blood face down on the ground before I even realized what was happening to me. As I struggled to crawl to my feet, I was greeted by thunderous kicks to my ribs and my temple and the venomous and inconceivable cry, “die fucking faggot.” Here in Palm Springs, alone and without warning I was being gay bashed. Two strangers filled with hatred, and clear intent, were trying to end my life simply because of who I am. As I began to realize that my life could end here in this rocky, abandoned lot where they had dragged me from my car, my survival instinct surged from the very core of my being. I began to fight back, take swings, kick, scream. I threw rocks. I grabbed a pipe on the ground and brandished it as a weapon. I’m quite certain that my animalistic rage and the sheer volume of my screams surprised them. Eventually, they slunk back into the night from which they came.
Things like this happen ever day, yet Chimperor Bush wants to veto a law that could help boost public awareness to the problem and perhaps prevent this type of hate based crime. That the Christo-fascists oppose this legislation seaks volumes about the falsity and perversion of their version of Christianity.
Posted by Michael-in-Norfolk at Thursday, May 10, 2007

People have forgotten in today's world that everyone has their own life to live, and it is up to them to live it to the best efforts.

Building your organization by promoting hatred is just simply pathetic, and it is built with no foundation, and will hopefully eventually fail.

People have forgotten, it's really all about kindness.